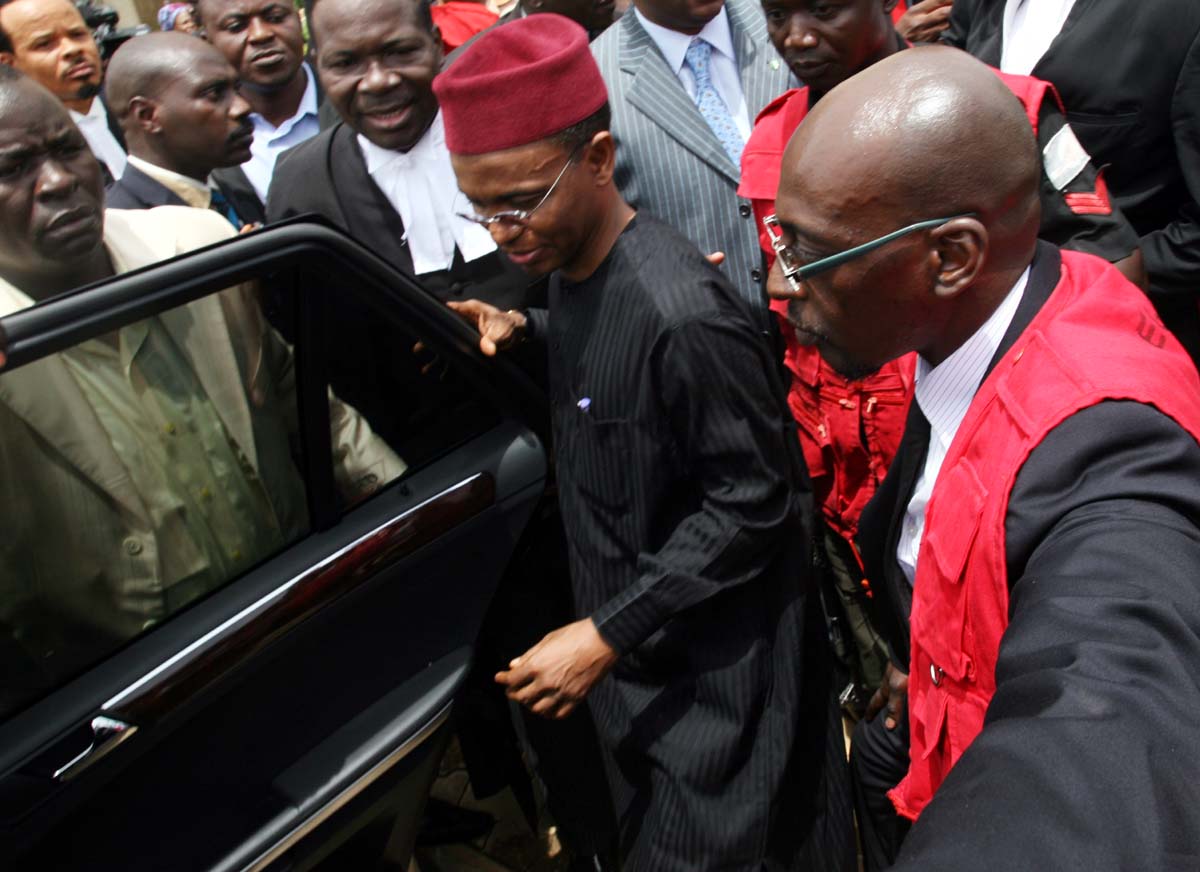 The intensity of the memo Kaduna state governor Nasir el-Rufai wrote to president Muhammadu Buhari last September as just released by SaharaReporters is hardly rivaled. However the apparent intention of the letter must be reviewed.

In the highly disparaging 30-page letter, the Kaduna governor lambasted president Buhari for failing even in mundane matters. Of note, the ‘kneel-of-death’ governor said:

“In very blunt terms, Mr. President, our APC administration has not only failed to manage expectations of a populace that expected overnight ‘change’ but has failed to deliver even mundane matters of governance outside of our successes in fighting BH insurgency and corruption.” 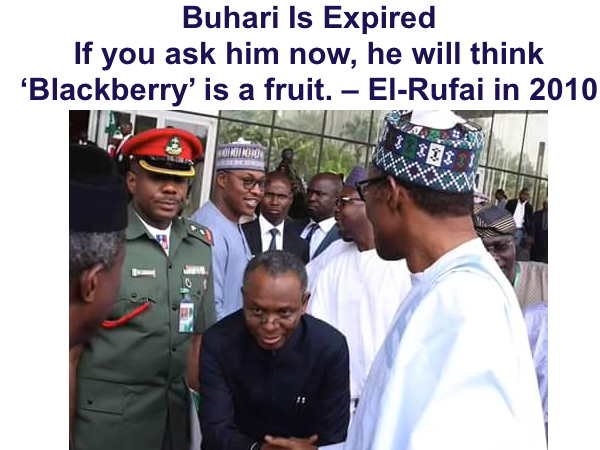 Two things immediately strike the observer. Firstly, the timing of the letter’s public release piques. The memo written in September was leaked sometime in February this year while president Muhammadu Buhari was on medical leave in the United Kingdom, with his well-being and capacity to return to power noted to be on the lines. The Kaduna governor has been analysed to be one of several governors vying for the expected to be open, Vice president slot should Buhari be terminally indisposed or resign. To this observation, the letter appears to have been leaked as an advertisement for the Kaduna governor. 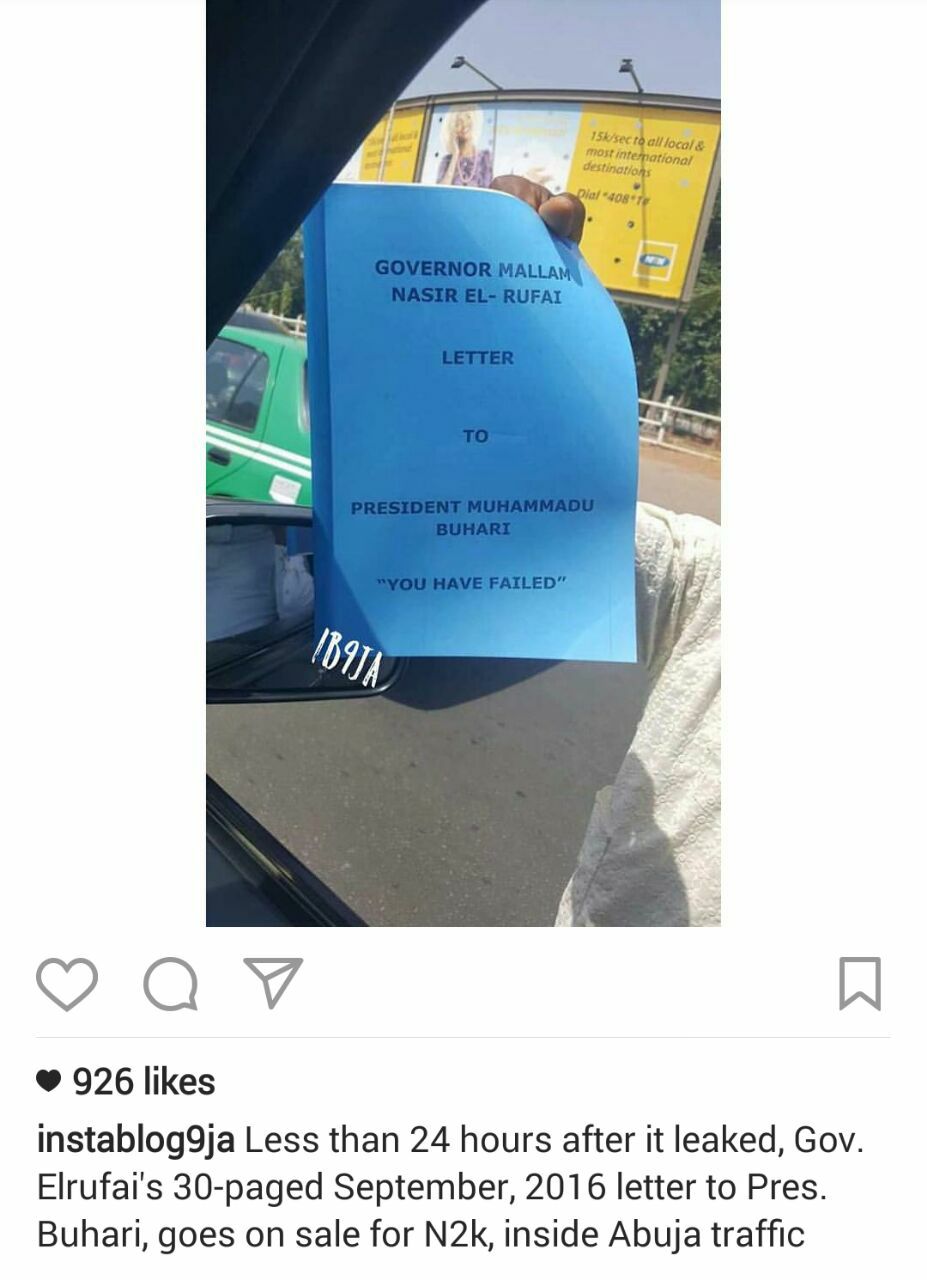 Secondly, and most importantly, the motive of the letter deserves analysis. The purpose of the letter as stated therein could not be lost on the reader.

In his words, the Kaduna governor without wasting any, gave three reasons for his letter and a final conclusion. “Mr. President, Sir I address this and other past memos with all sense of responsibility for at least three reasons.”

“First, I owe my modest political ascendency so far to you.

“Secondly, Sir, poll after poll in Kaduna State before and after the 2015 elections clearly show that my fate politically and otherwise is uncannily tied to yours.

“Finally, Sir, I am of the strong opinion and belief that you are our only hope now and in the medium term of saving the Nigerian nation from collapse, and enabling the north of Nigeria to regain its lost confidence, begin to be respected as a significant contributor, and not the parasite and problem of the Nigerian federation.“

“Mr. President, it is also clear to many of us that have studied your political career, that so long as you remain in the political landscape, no Northerner will emerge successfully on the national scene.“

From the above reasons, the purpose of the memo is laid bare. The memo was not written according to it’s author, in the interest of Nigeria’s progress, the well-being of the masses and the hope of future generations. The letter was not written in hope of national unity, security and harmony. It was written for the reasons above as emphasized below:

The letter according to Nasir el-Rufai was written because the Kaduna governor feels politically tied at the hip to the person of Muhammadu Buhari. Buhari’s failure is his failure and defines his future, he felt.

The letter was also written because the Kaduna governor felt personally indebted to the president for his role in the governor’s political victory in Kaduna “as polls relayed.”

“…saving the Nigerian nation from collapse:” The letter was written, not emphatically to push Nigeria on the right course, but merely to save it from total collapse and possible disintegration – perhaps till el-Rufai can fulfill his desire to become its leader. You cannot become a president of a nation that has collapsed.

Finally, the letter was written out of a sectional felt desperation. El-Rufai found it of utmost importance to delineate his objective of the letter to redeem northern image and rescue the north section of Nigeria from being seen as “parasites and a problem” to the rest of the nation. The letter was written for the north, el-Rufai’s ethnic and political base.

I will criticize the governor as freely as he criticized president Buhari and his, or perhaps a bit less harshly. I believe this is fair.

Governor Nasir el-Rufai is a very talented man. The letter was a good letter, this must not be denied. Though perhaps not quite sufficient in scope of advice, the critical letter did contain unprecedented single-document content on several problems with the Buhari administration and concisely laid-out with time-tables, pieces of advice on how and when to urgently tackle them.

However el-Rufai’s personal political interests and secondly the interests of his region were paramount in the letter. The letter according to the governor was written to save his political career and protect his future political ambitions. The letter clearly at the time it was written has ruled out Buhari contesting in 2019. Perhaps due to information on Buhari’s state of health or intentions not to re-contest, hidden to Nigerians but at el-Rufai’s disposal at the time.

El-Rufai from his declaration in the letter, was bluntly sending out the propositions in the interests of his future political campaigns, possibly for the presidency and/or vice presidency, and also wrote the letter in the interests of Northern presidential candidates and the northern region alone. (Side Note: north as far as ruling Nigeria is concerned, is core north and does not typically include middle-belt Kwara, Boko Haram-torn Kanuri northeast etc, which are only added to the “north” equation when needed for population politics.)

The governor briefly stressed saving Nigeria from collapse which will obviously eliminate any political ambitions due to his linkage with Buhari as severally stated, and the obvious impossibility of his ascendency to the desired president’s office if there is no Nigeria.

I must stress that el-Rufai is a well educated and quite intelligent human being. He is a great technocrat and knows how establishments are run. The letter, whether written by him or for him is a masterpiece. However as important as this skill-set is, more important is the fact that knowing stuff academically does not make you worthy and a safe candidate to govern.

The history of el-Rufai’s corruption (with an open case with the EFCC) and insensitivity while minister of the FCT and his recent grave errors and maliciousness as governor of Kaduna quickly come to mind. From spinal abrupt bans of beggars to illegal demolitions. From massacres and secret mid-night burials of minorities to payments to suspected terrorists the governor feels tribally aligned to. El-Rufai is a devoted tribalist and a brutal thirsty dictator with little sense of empathy for the proletariat and common masses. Self-interest and the interest of fellow elite and then his “tribe” and perceived religious sect, unabashedly supersede the interest of the collective and his subjects.

In relate-able terms. Unlike former president Goodluck Jonathan who perhaps most of us will never hire to man any business venture we have, I will hire the Kaduna governor to manage my Fulani halal meat abattoir enterprise, but nothing else. He can get the job done but he will put self first, followed by family, then elite co-sojourners, then tribe, then region, then religious sect, then the rich, before he thinks of the poor and masses.

Scandalous memo: @elRufai or @MBuhari, who do you stand with❓

Satan was the first tribalist and ethnocentrist, we learn from the religions. Satan challenged God in the following convo; ‘ Allah [God ] said, “What prevented you from prostrating when I commanded you?” [Satan] said, “I am better than him. You created me from fire and created him from clay.” (Quran Chapter 7:12)‘

I must commend the Kaduna governor for never shying to state and declare clearly and unambiguously his loyalty to self and section, in memos and tweets, writing it openly for all to read.

Buhari and Nigeria would be best advised to embrace all good messages but beware of the messengers in these trying times.