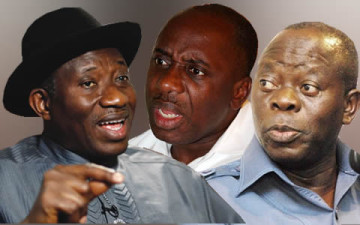 Nyako, who spoke through his media aide, Ahmad Sajoh, said information at his disposal had now shown that the Presidency and the Peoples Democratic Party were deeply involved in his impeachment.

There have been reports that Nyako, who has gone underground since his impeachment on Tuesday, would be arrested for treason over the memo to the northern governors on April 4, 2014.

Nyako, in the memo, had accused President Goodluck Jonathan’s administration of genocide against the North.

He had accused the administration of organising the killing of citizens and then quickly attributing same to the Boko Haram sect.

Nyako had stated, “Cases of mass murders by its bloody minded killers and cut-throats are well known, but it attributes the killings to the so-called Boko-Haram.

The Edo State Governor, Mr. Adams Oshiomhole and his Rivers State counterpart, Mr. Chibuike Amaechi, have said they are not losing sleep over the alleged plot by President Goodluck Jonathan to push for their impeachment.

The duo said the Presidency and the Peoples Democratic Party could not impeach them as the case of a former governor of Adamawa State, Alhaji Murtala Nyako.