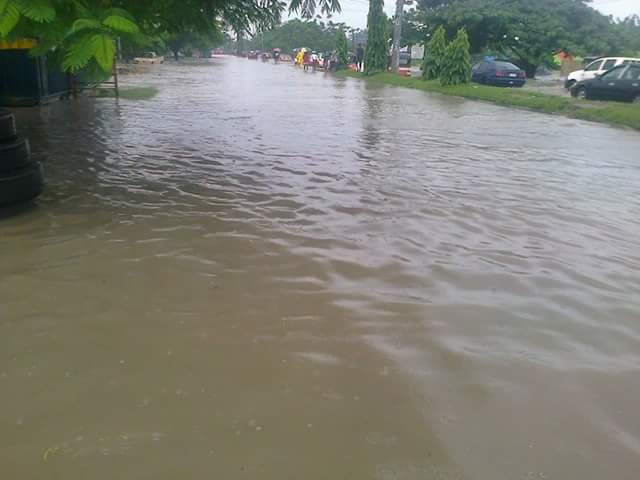 This is Atiku Abubakar Way (road) in Uyo, the capital of Akwa Ibom State this morning Thursday July 2, 2015. This is one of the major roads in the state capital which has been rendered impassable by flood.

Despite the claims by the immediate past administration of Mr. Godswill Akpabio that it constructed underground drainage system in the state capital, the reality on ground is that the state capital is being ravaged by endless flood. Whenever rain falls, it reminds people of the days of Noah in the Bible.

Billions were budgeted by Akpabio’s administration for road projects and drainage system in the state capital but what is on ground as seen in this photo mirrors a crass failure of governance in the state.

Figures released just yesterday by the immediate past Minister of Finance, Dr. Ngozi Okonjo-Iweala shows that Akwa Ibom State received a whooping sum of 265 billion naira as it share from the Excess Crude Account alone (excluding monthly federal allocations, IRV, grants, loans, and other sources of revenue) for 4 years alone, between 2011 to 2014. The question is what did Akpabio really do with such funds?

Yes Akpabio executed some projects, but is it commensurate with the funds that accrued to the state from May 29, 2007 to May 29, 2015? The Economic and Financial Crimes Commission (EFCC) cannot be talking about fighting corruption when Akpabio is still walking free. It is not possible.