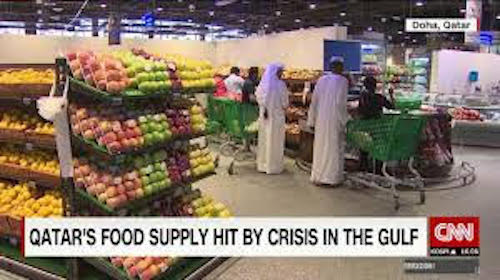 Food security has taken on a new dimension almost five months into the Gulf crisis that pits a UAE-Saudi alliance against Qatar and for which there is no resolution in sight.

The UAE and Saudi Arabia would deny that they are attempting to starve Qatar into submission with their diplomatic and economic boycott that has forced Qatar to seek alternative food suppliers and alternative air and sea shipment routes. Yet, de facto, their strategy is to drive the cost of Qatari food and other imports up to the point that the wealthy Gulf state no longer can afford the more expensive imports.

In the process, the boycott has redefined the national security aspects of food security, particularly for small states that are more vulnerable to external pressures.

Food security amounted for the Gulf states in the first decade of the 21st century to ensuring access in a global market in which shortages were driving up prices. The Gulf states responded to the food crises and massive price hikes in 2007-2008 and in 2010-2011 by following in the footsteps of China South Korea and Europe and acquiring huge tracts of agricultural land in Asia and Africa.

Ironically, high oil prices were one driver of the increased cost of food that prompted some exporters in Africa and Asia confronted with domestic shortages to restrict exports. The restrictions were what prompted the Gulf states to go on their land acquisition binge.

At the time, food security was for cash-rich but soil-poor Gulf states a question of market supply and demand and ensuring the food supply chain at whatever price. That narrow definition first changed with the popular Arab revolts in 2011 that toppled long-standing autocrats and sparked civil wars and a counterrevolution. Some of those revolts, like in Syria, which started as a peaceful protest in demand of change before it deteriorated into a catastrophic civil war, were prompted in part by droughts that effected the agricultural economy.

With the revolts, food security took on a far greater domestic security aspect for autocratic Gulf leaders whose legitimacy was rooted in a social contract that promised a cradle-to-grave subsidized welfare state in exchange for surrender of all political rights.

The Gulf crisis, however, has taken the dimensions of food security for the Gulf as well as small states elsewhere to a new level. Food security no longer is primarily about commercial access or preferred access to world markets at times of shortages and rising prices. Control of agricultural resources in far-flung lands no longer provides necessary levels of security. The Gulf crisis has broadened the aim of food security, particularly for small states, to include a diversified supply, guaranteed shipping routes, and self-sufficiency to the degree possible as a means of defense against attempts to starve a small state into submission.

The defense and security as opposed to market aspects of food have taken on additional significance not only because of Qatar’s need to fend off pressure on its food supplies by neighbours determined to undermine its independence and force it to adhere to policies devised in Abu Dhabi and Riyadh rather than Doha.

The most recent joint agricultural outlook of the United Nation’s Food and Agriculture Organisation (FAO) and the Organisation for Economic Cooperation and Development’s (OECD) for the next ten years suggests that the food crises of the first decade of the 21st century are for now a thing of the past. “Prices for the main crops, livestock and fish products all fell in 2015, signalling that an era of high prices is quite likely over for all sub-sectors,” the outlook said.

Food security is at the core of Qatar’s ability to resist UAE-Saudi pressure. Its continued capability to do so will likely define perceptions of margins of manoeuvrability that small states have in relationship to big brothers. “It sometimes takes war or the threat of war to make countries look at their food security,” John Dore, an Irishman who is helping Qatar become self-sufficient in dairy products, told The Guardian.

To compensate for the effects of the UAE-Saudi blocking of land, sea and air routes, Qatar initially shifted the bulk of its dairy imports from Saud Arabia to Turkey and Iran. Trade between Qatar and Iran has increased by 60 percent since the imposition of the boycott in early June.

Importing thousands of cows from Europe and the United States, Mr. Dore’s operation, within a matter of months, has been able to supply up to 40 percent of Qatar’s milk needs. He expects that the import of another 10,000 animals over the next year will make Qatar self-sufficient.

To be sure, Qatar’s enormous wealth gave it a leg up in its ability to fund resilience and its refusal to cave into the demands of its bigger brothers. In doing so, it relied not only on its financial muscle but also on the relationships and dependencies it established by diversifying the client base for its liquified natural gas.

Nonetheless, the long and short of Qatar’s fight is that how the battle in the Gulf unfolds and how the crisis is resolved will likely have far-reaching consequences for definitions of food security, priorities in shaping food security strategies, and the architecture of international relations as small states gain confidence, recognizing that size is no longer the only or main factor that determines their ability to chart an independent course.