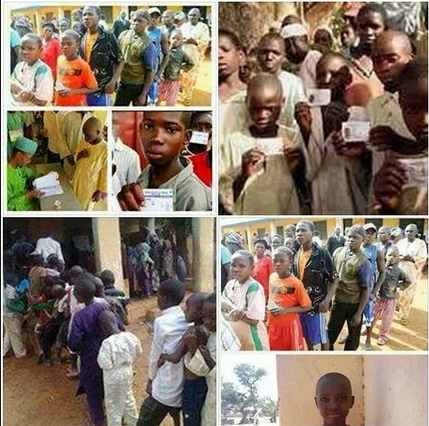 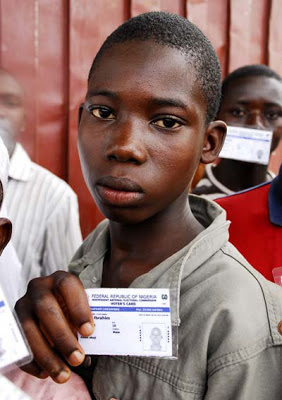 Let’s talk about those photos of alleged underage voters circulating on-line. I saw three so far. One I think is a genuine case of underage voting because the boy looked like he is going through the accreditation process. The others are funny because there seemed to be no adults at those polling units and also no girls. Only boys. I notice people are circulating it to show that elections were rigged in areas were the results didn’t favour the party they support. Let’s not rush in reaching conclusions. So I suggest, instead of posting only photos, add more details that will help in investigating it. Like the polling unit or just the local government where it took place. You know even Jega admitted there were reports of underage voting in a certain state. I later found out that it was in Taraba state. Guess which party won there?

You shouldn’t even be bothered about those. Most of those pictures are unfounded. They could have come from anywhere and taken for any purpose. They are even likely older pictures of earlier electoral events not necessarily 2015. Moreover the polls have been won, the loser has conceded defeat and is not challenging his loss in court. Has also stopped his party from doing so. Not a Buhari fan but good to keep things in proper perspective. Done deal that is…

Abubakar went on to say:

I saw the photos on your timeline. Please help us with more info. Especially the one with the card reader. With a little effort we can trace it since even the biometric information of the boy will be available in INEC’s database.

It seems some of my friends don’t want to let go that’s why I am bringing it up. It is things like this that further promote hatred and many years later they start telling their children stories that keep the cycle going. We need to get to the bottom of this thing.

Let’s see these issues to the end. It’s not about this election. It’s about the stories we will tell the next generation. Just get us the polling unit number. We can take it from there. Don’t just give up without trying.