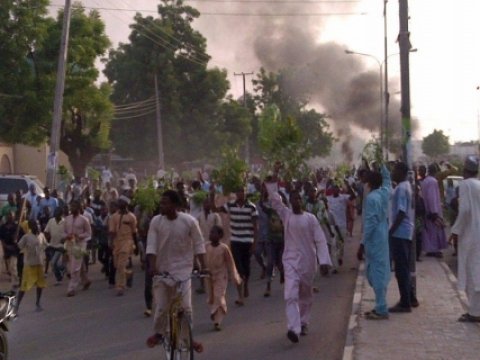 An eyewitness told our reporter that the court located at Rijiyar Lemo area of Kano metropolis, was completely razed when angry youth who were impatiently waiting to witness the trial of Nyass stormed the court’s premises.

According to him, the incident occurred at abou

t 11am before the magistrate of the court and the accused arrived, recalling that the mobs around the court suddenly turned chaotic and in a moment, the court building was on fire.

He noted that the youths were dispersed by the intervention of police officers before firefighters of the Rijiyar Lemo division arrived and put off the fire.

The mobs in their hundreds then proceeded to the emir’s palace and to Kano Government House to lodge their complaints, demanding for prompt execution of the accused.

The irate youths laid siege at the Kano emir’s palace to express their grievances and urged for timely execution of the culprit who was waiting for trial at a prison in the state.

The demonstrators blocked the roads leading to the emir’s palace, causing traffic gridlock around the area and carrying placards which contain various messages of Prophet Muhammad (SAW).

Some of them tied up red strips of cloth around their heads with green tree leaves in their hands while marching towards the venue chanting “Allahu Akbar”, meaning Allah is great.

Speaking, an irate youth, Halifa Mustapha, said the demonstration was to express their sadness for the alleged insult against Prophet Muhammad, adding that their demand was to draw the attention of the government towards a timely execution of the culprit.

The statement of Nyass sparked outrage among Muslims around the state, leading to his arrest by the state’s Police command and subsequent attack on his residence by irate youths.

However, the two prominent national leaders of the sect, Sheikh Isyaku Rabiu and Sheikh Dahiru Bauchi, distanced themselves from the statement in a simultaneous press conference held in Kano.