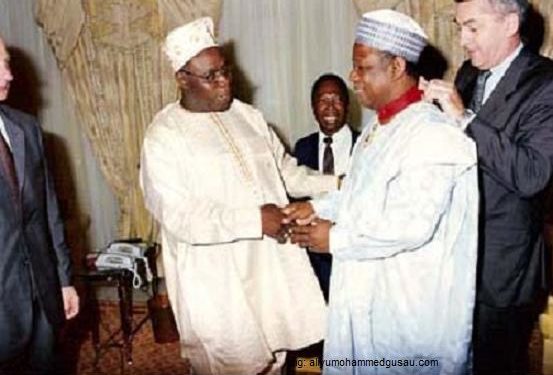 The first goal of any Nigerian that hopes to contribute to Nigeria’s development is to get ready for a battle with the untouchables. These symbols of Nigerian entrenched power must be demystified if the new breed will have any chance. Until we sweep them all out of power, into retirement, there would not be any change in attitude. – Rudolf Okonkwo

NewsRescue- Die-to-rule, Spymaster and US informant, Aliyu Mohammed Gusau has been reported by numerous experts according to media articles, to be Nigeria’s chief Boko Haram terror mastermind. Gusau, an element of the brutal Babangida regime, who Abacha, knowing full well the danger he represented, retired from the service, has somehow wound his way into Nigerian military and civilian top intelligence duty.

This terror mastermind, was surprisingly hired as NSA under Obasanjo’s civilian administration and again by Jonathan, until he retired to contest the 2011 elections.  Gusau has been the man at the helm, who supervised and covered up the arming and metamorphosis of Boko Haram terrorist group. But, this powerful man and great friend and informant to the US government on Nigeria’s top intelligence matters, linked also to Obasanjo and other top Civilian and military rulers, and also fingered in relation to a Lebanese war capacity arms cache in Kano, is untouchable.

He presents a threat that surpasses none in Nigeria, to government and media alike. It is really odd that Nigeria literally kept “Babangida”—Gusau being the worst engines of the Babangida’s brutal dictatorship—in the helm of power as NSA through its civilian regimes. Perhaps the idea that led only to terrorism north and south, was to put the wolf in charge of protection of the sheep. Gusau still controls the office of the NSA through his brother-in-law, Sambo Dasuki. Gusau is conveniently married to Dasuki’s wealthy sister, Jamila.

Gusau was recalled as NSA by the newly elected President Olusegun Obasanjo in May 1999 whose emergence and election Gusau had done so much to make happen. … Obasanjo was quoted as saying jocularly that he would rather have Aliyu Mohammed Gusau permanently beside him while he served as President than have him operate from outside. –Abdulaziz on Gusau at 70

[Obasanjo kept him on as National security Adviser (and as such the head of Nigeria’s intelligence apparatus) because of his competency as the NSA and because he wanted to keep him in the tent rather than have him on the outside; see cable source below]

Can current NSA, Sambo Dasuki, whose sister Gusau is married to, arrest Gusau? 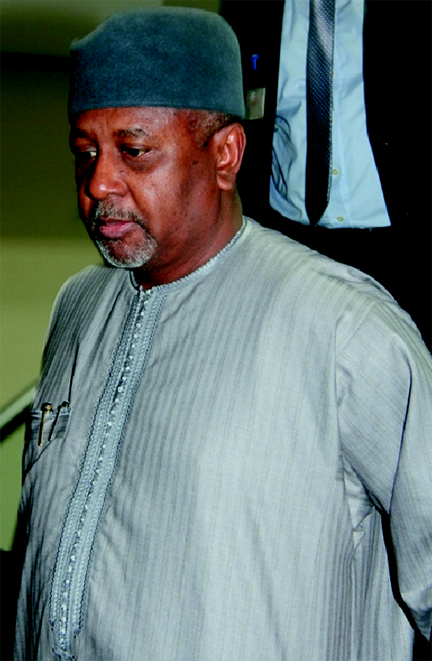 President Jonathan always tells Nigerians that he knows the sponsors of the deadly Boko Haram, but he can not reveal them. Late General Andrew Azazi, who literally named Gusau as the Boko Haram sponsor, died in a violent helicopter explosion not long after, in what is described as “Babangida era assassination.” When Nduka Obaigbena’s Thisday picked on the spymaster and US informant, the article below, presents the result of that to the editorial. It is not likely president Jonathan has the liver to arrest Gusau as a suspect for treason and decades of direct and negligent terrorism against Nigeria’s people.

Aliyu Gusau and other untouchables

Behind every throne, the philosopher says, there is something bigger than the King. The Nigerian presidency is a throne presently occupied by Olusegun Obasanjo. But behind that throne are people who are bigger than the King. None of them has been on the spotlight lately as Lt.-General Aliyu Mohammed Gusau. He belongs to the exclusive club of the Nigerian untouchables. Currently, he is under attack by a section of the Nigerian media and he is fighting back with great fury. And when an untouchable fights back, it is not a pretty sight.

Mohammed Gusau is Nigeria’s National Security Adviser. He was the Chief of Army Staff during Shonekan’s Interim National Government of 1993. Just like many people around Obasanjo, he has been on Nigeria’s political scene for a while. He was a royal friend of Babangida who was retired by Abacha. He is credited to be the man who “sold” Obasanjo to the north. Before Gen. Babangida paid the famous courtesy call to Otah farm, General Gusau was the forerunner.

As the National Security Adviser, General Gusau is one of the most powerful people in Nigeria. He knows what ordinary Nigerians do not know. He is in control of both the military and civilian intelligence network, so he can make things happen. And he does with impunity. He knows who is writing fake checks and who is wearing dirty underwear. He knows who is sleeping with another man’s wife and who is stealing Nigeria’s money. He knows a lot. Obviously, more than the King, Obasanjo knows. That is why he is something behind the throne that is bigger than the King.

One of his special assignments in this current administration is the recovery of public funds stolen from Nigeria’s treasury by past governments. Whether that assignment includes looking at the activities of his friend Babangida from 1983 – 1993, we may never know. By all indication, Gusau is on the heals of the Abachas. Like everything Nigeria, Gusau’s problems seem to be coming from all the complications that follows anyone who ever dined with the devil. And in his case, he dined with a short spoon.

As Nigeria’s security agencies uncover loots and fingerprints, the Nigerian press uncovers footprints. Sometimes, the footprints of the untouchable are seen in areas where the devil stepped on. Which is not totally unexpected considering the fact that the untouchables have the habit of hanging around the devils. In defense of the Nigerian press, the press like the police does little profiling. It also believes that birds of the same feather flock together. The press thinks there is no smoke without fire. That is the premise from which the press begins to work until stories are confirmed and published or unconfirmed and discarded. So it is not difficult to understand why a sector of the Nigerian press will begin by labeling Gusau as the ring leader of the cabal trying to impose Obasanjo on Nigeria and ended up calling him the principal actor trying to destabilize Obasanjo’s administration.

As time goes on, Nigerians are beginning to discover that the man Babangida embraced is more dangerous than the man Abacha did. I would first have as heroes, men Babangida rejected before I accept those Abacha rejected. Abacha was crude, evil and insane. He surrounded himself with sycophantic fools who displayed their pathetic ignorance. The same could not be said of Babangida. He was tactical, evil and cancerous. He surrounded himself with intelligent idiots who displayed their criminal foolishness. In the long run, it would be proved that friends of Babangida did more damage to Nigeria than friends of Abacha. Abacha’s men took away our cash but Babangida’s men took away our cash and something more expensive- our soul.

So the tragedy of General Gusau goes back to the tragedy of his master, Babangida. Like most men around Obasanjo, he came in with heavy luggage and it is beginning to wear him down. Surrounding himself with a legion of untouchables was Obasanjo’s first mistake. Those Warren Christophers of Nigeria, those Henry Kissingers of Nigeria who ought to have retired into private life are busy parading themselves along Nigeria’s corridors of power with all their luggage as the untouchables. The Asiodus, the Ciromas, the Ogbemudias. Men, whose names I learnt in Social Studies classes in primary school are the same names that my children would be learning. And it wasn’t that they did such a wonderful job in the past to warrant a return journey. When Babangida brought in Philip Asiodu to serve in his Interim Government, the press asked Asiodu how he felt about the enormous task facing him. Asiodu told the press it was just a routine assignment.

To the untouchables, the Nigeria project is just a routine assignment. They have been there, and they have done that. On pieces of papers where Nigeria’s money were signed away, their signatures abound. They know the system very well. They have traveled the road many times. They are well connected. They were there when it all began. There is nothing really that anybody can do to them. They can blackmail. They can open a can of worm nobody wants to open. They can pull the right strings and people will start falling down. Yes, they can. They have all the apparatus of state power in their hand. Each day the untouchables spend around the corridors of power, they are busy covering their footprints.

Mr. Nduka Obaigbena, publisher of ThisDay newspaper now knows what it means to look for and discover the footprint of an untouchable along the unholy path of Nigeria’s public life. The paper has the audacity to pursue stories about possible links between Aliyu Mohammed Gusau’s Paris account and the loots recovered from the Sani Abacha family. They were looking at possible kick-backs in the 12 billion naira paid to Julius Berger before Obasanjo visited Germany and if it is responsible for the current in-fighting between government officials. The paper was also looking at Vice-president Atiku’s claim that retired Generals were behind Sharia crises.

How dare you ask questions about the untouchables? For that reason, Obaigbena has to explain to the State security Service (SSS) the circumstances behind an unsettled bill of $23, 407.39 owed to Marriott Wardman park Hotel, in Washington DC during IMF/World Bank meeting with Nigerian officials in DC. Mr. Obaigbena has since stepped aside as the publisher and Editor-in-Chief of ThisDay while he fights to clear his name. He would be fighting amongst others, the National Council on Privatization (NCP) who he claimed owe his company, Leaders and Company Limited $150,000 for co-ordinating dinner/briefing of the 1999 World bank/IMF annual meeting held at Marriott Wardman park House.

If there is a non-criminal way of qualifying Abacha’s name with the word credit, it is in relation to the untouchables. Abacha, in his brutal nature, showed no respect for the untouchable. He dethroned Alhaji Ibrahim Dasuki. He put Obasanjo in jail- something Babangida only dreamt of. He also put Yaradua in jail. A move that even shocked Yaradua himself. And he succeeded in replacing the old untouchables with his cronies whom he devoured, as he seemed fit.

The first goal of any Nigerian that hopes to contribute to Nigeria’s development is to get ready for a battle with the untouchables. These symbols of Nigerian entrenched power must be demystified if the new breed will have any chance. Until we sweep them all out of power, into retirement, there would not be any change in attitude. The greatest danger the untouchables pose to the Nigerian nation is that they are contaminating another generation of Nigerians who are struggling to find their way into positions of responsibility. That is the deepest cuts of them all. http://nigeriaworld.com/columnist/okonkwo/0408200.html

Related: Gusau, is a regular source of high intel. Nigerian information to the US

Wikileaks cable, 2004- 9. (C) Comment: Aliyu Mohammed has been a power-behind-the-throne in Nigeria for a generation. A product of the Northern, Muslim establishment, he has a reputation for competency — and is not associated with religious bigotry. Though well-known for being close to Babangida, the conventional wisdom is that Obasanjo kept him on as National security Advisor (and as such the head of Nigeria’s intelligence apparatus) because of his competency as the NSA and because he wanted to keep him in the tent rather than have him on the outside. And Aliyu Mohammed and Obasanjo appear to have developed a good working relationship: Aliyu Mohammed travels constantly with the president, appears to have total access to him. Aliyu Mohammed is instinctively pro-American, has long been concerned about Nigeria’s vulnerability to international terrorism, especially in the North. In my view, It would be in our interests for him to visit USEUCOM, as he so much wants to do. 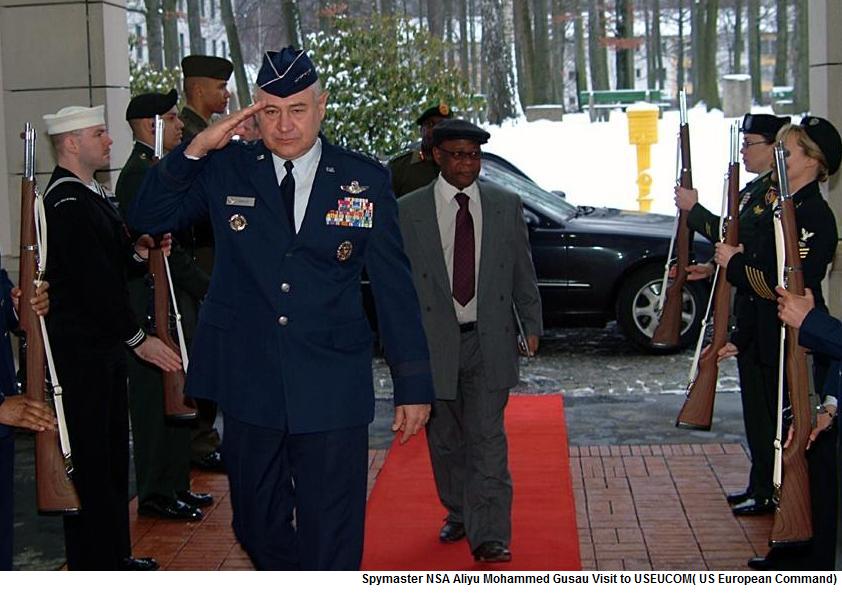 His visit was apparently granted