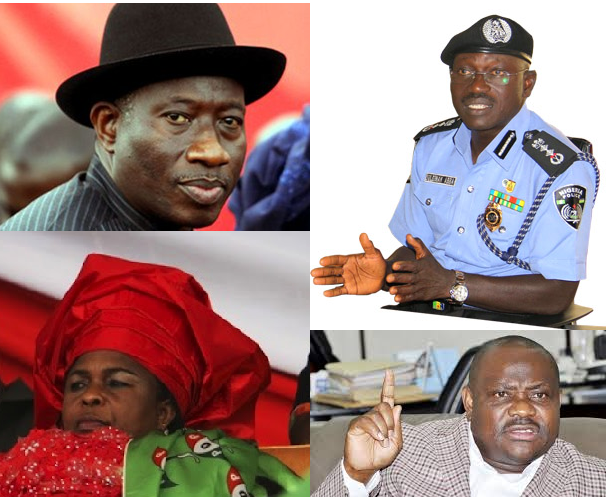 ABUJA — THE Inspector-General of Police, Mr Suleiman Abba, yesterday, became the first major casualty of the just concluded general elections, which President Goodluck Jonathan and his party, the Peoples Democratic Party, PDP, lost to the opposition.

The police officer, who was elevated to the post only last year, incurred the wrath of the Presidency on the eve of the governorship and House of Assembly elections for allegedly arguing with the government officials over the directive to recall the Assistant Inspector-General of Police in Charge of Zone 6, Tunde Ogunshakin, from Rivers State.

Abba, it was learnt, had deployed Ogunshakin from his base in Calabar to Port Harcourt to oversee the governorship election in Rivers State following complaints by Governor Rotimi Amaechi of Rivers State, that the police had collaborated with the Independent National Electoral Commission, INEC, and the PDP to intimidate APC members and rig the presidential and National Assembly elections in the state.

His refusal to pick calls over Ogunshakin’s recall

Another source said the former police boss reportedly ignored presidency official’s objection to the deployment of Ogunshakin to Rivers State on the allegation that the police officer was sympathetic to Amaechi and his party and would, therefore, not allow the PDP win the state.

A Presidency source told Vanguard that on learning that the IG had defied its order by redeploying Ogunshakin to Rivers State to supervise the governorship elections. A presidency official called the former police boss to recall the AIG with immediate effect from Rivers State or face the consequences.

The source said the presidency felt slighted when it could not get through to Abba.

The former police boss reportedly told the Presidency that AIG Ogunshakin was a formidable Police officer whom he described as a ‘no-nonsense officer’ feared and respected in the Police Force hierarchy and capable of ensuring law and order in the place of new assignment.

Vanguard learnt that although the sacked IG reluctantly recalled Ogunshakin from Rivers State, forcing him to quit Port Harcourt by 5 am on the election day, Presidency did not forgive Abba for redeploying Ogunshakin reluctantly.

Another sin of the former IG was his presence at the presentation of the Certificate of Return to Muhammadu Buhari at the International Conference Centre on April 1, 2015, which convinced the Presidency that the IG was actually working for the opposition and it moved quickly against him.

The Senior Special Adviser to the President on Public Affairs, Dr. Doyin Okupe, could not also be reached for comments on the development.

Abba’s sack was announced by the president’s spokesman, Reuben Abati, in a statement yesterday. No reason was given for the sack while a Deputy Inspector-General of Police, Solomon Arase, was appointed to act in his stead.

Abati’s statement read in full: “President Goodluck Jonathan has relieved the Inspector-General of Police, Mr. Suleiman Abba, of his appointment and duties with immediate effect.

“Until his appointment as Mr. Abba’s replacement, Mr. Arase was the Head of the Force Criminal Intelligence and Investigation Department.

“He is also a Fellow of the Nigerian Defence College.”

He was confirmed substantive IGP on November 4, 2014.

Abba was, until that appointment, an Assistant Inspector General, AIG, in charge of Zone 7 Command, a position he occupied since May 25, 2012. He was also an Aide-De-Camp, ADC, to the wife of a former military Head of State, Maryam Abacha.

With his removal, Mr. Abba will proceed on forced retirement, four years before he attains retirement age.

He enlisted in the Nigeria Police as Cadet Inspector on December 31, 1984 and is actually due for retirement on March 22, 2019.