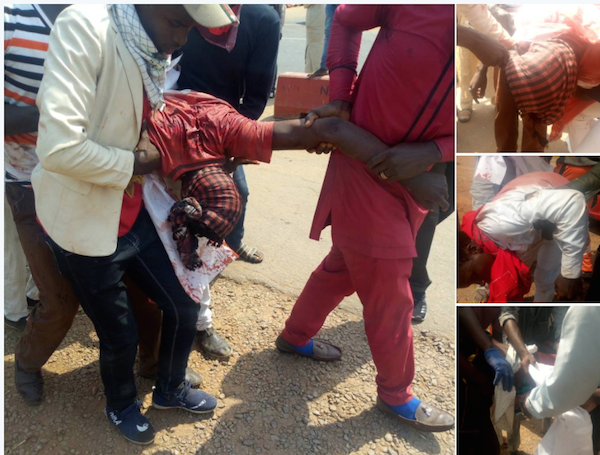 Security agents are spreading false information and rumours with a view to breaking our will and causing confusion so that they could seize the opportunity to turn our peaceful protests into violence.

Credible reports have confirmed that hoodlums have been commissioned by the authorities to foment trouble by burning tyres and properties in the course of our peaceful processions.

Part of their evil plot involved spreading false news of the alleged death of our leader, Sheikh Ibraheem Zakzaky due to illness on fake Facebook profile pages. They had hoped to achieve their mischievous aims by using that to wreck havoc and attribute same to a supposed reaction of members of the Islamic Movement.

When all their evil machinations failed woefully however, the security agents went wild by themselves and opened fire on peaceful protesters demanding for the immediate release of Sheikh Zakzaky to enable him attend to his deteriorating health status in illegal detention of Nigerian authorities. As a consequence of this brutality by the Police, two people were killed and scores were wounded.

The police further arrested hundreds. Similarly yesterday, policemen had used live ammunition to stop the procession, injuring quite a number, including Sheikh Qasim Umar Sokoto. A journalist was bartered with clubs and sticks until his arm was broken by the police. Today the police were even more brutal in the attack on the peaceful protesters.

This police fury followed their inability to cash on the effects of such fake news and reports they have circulated on social media to incite violence to discredit the Islamic Movement.

The Islamic Movement will like to reiterate its age-long stand of adopting peaceful means  in pursuing its objectives. We vehemently reject any attempt to label us violent and we are so orderly for anybody to incite us into taking illogical violent means. We would not be held responsible for anything contrary to our peaceful resolve and methods.