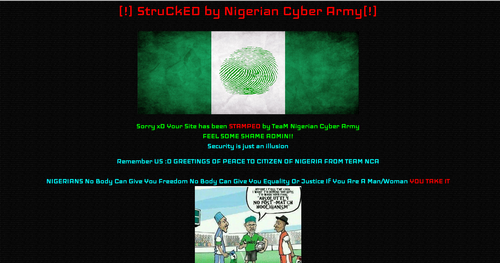 The official website of the Independent National Election Commission (INEC) was hacked today, by a group identifying itself as the Nigerian Cyber Army.

“Sorry xD Your Site has been STAMPED by TeM Nigerian Cyber Army FEEL SOME SHAME ADMIN!! Security is just an illusion” a statement read on the hacked INEC site.

Below the statement was a political cartoon of INEC Chairman Attahiru Jega dressed in a footballer referee outfit, apparently describing the rules to APC candidate Mumhammadu Buahari and President Goodluck Jonathan, who were dressed in football jerseys. The Jega cartoon said “absolutely no post-match hooliganism.”

The Nigerian Cyber Army warned that they also had access to other high ranking government servers in Nigeria.

INEC officials commented that they are looking into it.