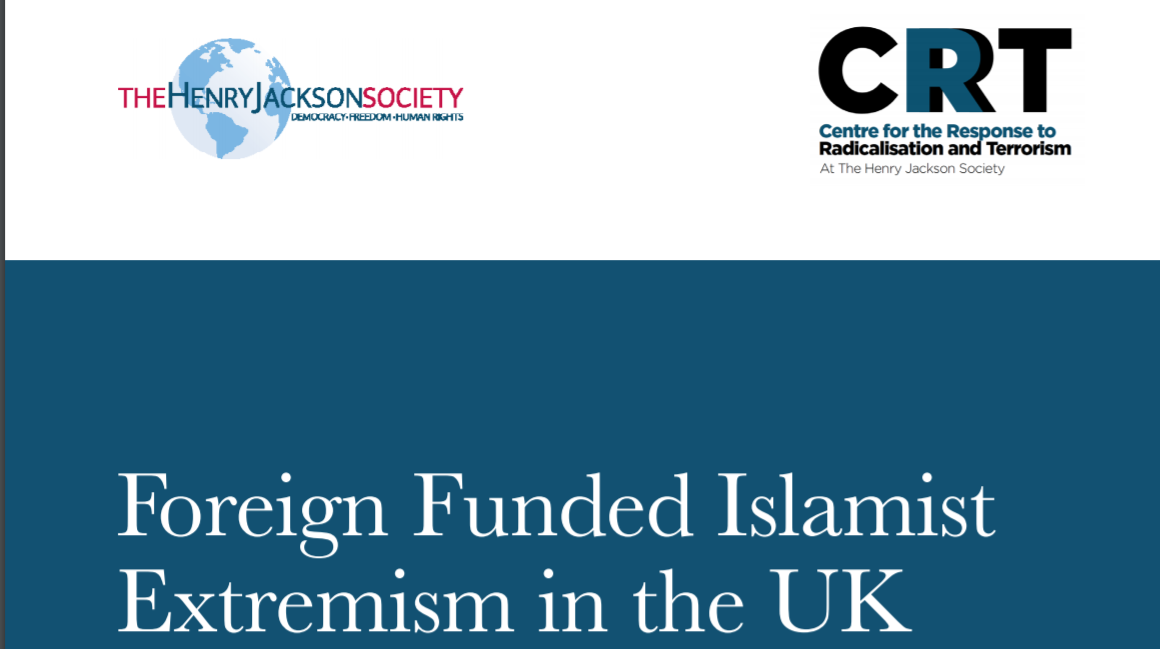 A report charging Saudi Arabia with funding extremism in Britain puts both the kingdom and Prime Minister Teresa May on the spot. The report also potentially strengthens Qatar’s insistence that support of extremism should be tackled regionally and that demands by an anti-Qatari, Saudi-UAE-led alliance be addressed to both sides of the divide in the Gulf crisis.

The report by the conservative Henry Jackson Society asserted that among Gulf states and Iran, Saudi Arabia was the primary funder of extremism in Britain as well as elsewhere. It said the kingdom “since the 1960s has sponsored a multimillion dollar effort to export Wahhabi Islam across the Islamic world, including to Muslim communities in the West.”

Publication of the report could not have come at a worse moment for the kingdom and Ms. May. Saudi Arabia together with the UAE has led a month-old diplomatic and economic boycott of Qatar, which they accuse of supporting extremism and terrorism. Qatar has denied the charges.

By the same token, the report increased pressure on Ms. May to publish a government report on funding of extremism in the UK that reportedly also points fingers at Saudi Arabia. Ms. May has said the government was reviewing its report and would decide on publication in “due course.”

In a statement, the Saudi embassy in London said any accusations that the kingdom had radicalised “a small number of individuals are baseless and lack credible evidence.” The embassy insisted that “we do not and will not condone the actions or ideology of violent extremism and we will not rest until these deviants and their organisations are destroyed.”

Both Saudi Arabia and jihadists use the term ‘deviant’ to describe one another. In doing so, both acknowledge Sunni Muslim ultra-conservatism and jihadism’s common roots but accuse the other of having deviated from the right path.

A Saudi-UAE-led alliance gave Qatar a ten-day ultimatum that expired this week to meet 13 demands that beyond halting support for extremists and Islamists, included closing a Turkish military base in the Gulf state, lowering its relations with Iran, and shuttering Qatar-sponsored media, including the controversial Al Jazeera television network. The alliance threatened further sanctions if Qatar failed to meet the demands which the Saudis declared were non-negotiable.

Foreign ministers of Saudi Arabia, the UAE, Egypt and Bahrain, gathered this week in Cairo to decide how to respond Qatar’s rejection of their demands, said further steps to force Qatar’s hand would be decided at the“appropriate time.”

Sensitive to criticism of their demands by various Western leaders and calls by the United States, Europe, China and Russia for a negotiated end to the Gulf crisis, the ministers focused in a news conference on six extremism-related issues.

They demanded that Qatar commit to combat extremism and terrorism, suspend provocative acts and speeches that incite to hatred or violence, adhere to various Arab agreements, and stop interfering in the internal affairs of others and supporting illegal entities.

On paper, the demands look like the basis for a solution of the Gulf crisis. The problem is that there is widespread disagreement on what constitutes extremism, terrorism, and incitement to hatred or violence, and which organizations are illegal. Many view Wahhabism, the interpretation of Islam adopted by both Saudi Arabia and Qatar, as extremist. Saudi Arabia and the UAE have, moreover, banned the Muslim Brotherhood, a group that Qatar backs, and that is legal in the United States and Europe and has not been designated under international law by the United Nations.

Nonetheless, the demands buffeted by the Jackson Society report potentially open a door for Qatar to level the playing field by insisting that the accusations against it are in fact also being levelled against its detractors.

The Jackson Society report, despite the fact that there is little doubt that Saudi Arabia has massively promoted various forms of Sunni Muslim ultra-conservatism, regurgitates long-known facts and assertions. It is largely based on secondary sources, primarily media reports, rather than on independent investigation.

As a result, the report at some points jumps to conclusions while at others it appears to underestimate the impact of Saudi backing of Sunni Muslim ultra-conservatism. Quoting a book by BBC journalist Innes Bowen as well as a US State Department report on international religious freedom, the Jackson Society noted that the number of Salafi and Wahhabi mosques in Britain had increased from 68 in 2007 to 110 in 2014.

While that constitutes a substantial increase, the Jackson Society report failed to note the far more worrisome fact that almost half of Britain’s 1,750 mosques are Deobandi, a Saudi-backed South Asian strand of Sunni Muslim ultra-conservatism.

Usama Hasan, a scion of Britain’s foremost Salafi scholar, who was employed by the Dawa or proselytization department of the Saudi embassy in London before becoming head of Islamic studies at the Quilliam Foundation, estimated that at least half of the Deobandi mosques in Britain were Saudi funded. Saudi-backed Deobandi influence is magnified by the fact that a substantial number of UK-trained Muslim scholars are graduates of Deobandi institutions. A majority of militants in Pakistan adhere to Deobandism.

Similarly, a host of intelligence reports, politicians and pundits assert that Saudi-backed Sunni Muslim ultra-conservatism enables an environment that under certain circumstances breeds extremism. Nonetheless. despite preaching an intolerant, anti-pluralistic and supremacist brand of Islam, Sunni ultra-conservatism is not in and of itself violent nor does it lead by definition to extremism or violence.

Instead, ultra-conservatism complicates forging a synthesis between Islamic and Western values and serves as a catalyst for extremism among those segments of society in search of a meaningful life-guiding philosophy, desperate to vent frustration and anger, or seeking glory.

Noting that British “national counter-terrorism strategy has placed increased emphasis on addressing the role that non-violent Islamist extremism and extremist ideology plays in ultimately leading some individuals to commit acts of violence,” the report implicitly lays responsibility for political violence perpetrated by Muslims primarily at the doorstep of Saudi-backed ultra-conservatism.

It noted that “some of Britain’s most prominent Islamist extremist preachers — men such as Abu Qatada, Abu Hamza, Abdullah al Faisal, Sheikh Omar Bakri — have all sat within what can be described as a broadly Wahhabi/Salafi ideology.”

A Jordanian national, Omar Mahmoud Othman or Abu Qatada al-Filistini was extradited on charges of terrorism from Britain to Jordan where he was acquitted because of insufficient evidence. Mustafa Kamel Mustafa aka Abu Hamza al-Masri was convicted in both Britain and the US for terrorism.

A UK court convicted, Abdullah el-Faisal, a convert to Islam, to prison for stirring up racial hatred and urging his followers to kill Jews, Hindus, Christians, and Americans. A Syrian militant, Omar Bakri Muhammad, was barred in 2005 from returning to Britain where he had lived for 20 years. He was subsequently sentenced to life in prison in Lebanon.

The Jackson Society report said that many of Britain’s Wahhabi and Salafi scholars had been educated in Saudi Arabia. It charged that they “assist with the spreading of hard-line and illiberal interpretations of Islam to the wider British Muslim community.” Citing media reports, the report listed a host of Saudi-funded mosques that had been associated with extremism.

“There have also been numerous cases of British individuals who have joined Jihadist groups in Iraq and Syria whose radicalisation is thought to link back to foreign funded institutions and preachers,” the report said. It identified the UAE, Kuwait, Qatar and Iran as also funding ultra-conservatism but focused primarily on Saudi activity.

The report asserted that some 24 Saudi-funded schools in Britain used Saudi schoolbooks that the Islamic State had introduced into its education system. Quoting the BBC, it said that some 5,000 British children were being educated in 2010 according to the official Saudi curriculum in weekend classes in some 40 clubs and schools.

To be fair, the report acknowledged that “it is rarely the case that a definitive or causative connection can be established between foreign funding and individuals being recruited into terrorism.” As a result, while the report identified various British extremists as having had Saudi links, it failed to prove beyond any doubt that Saudi-backed ultra-conservatism by definition leads to radicalization and political violence.

To Qatar’s disadvantage however, the report highlighted the London-based Al-Muntada Trust, which it said was funded by the Gulf state. The trust, which is also believed to have close ties to Saudi Arabia and militant Saudi Islamic scholars, held its 2013 conference in Doha, according to the report. The Trust has condemned various attacks in recent months in Britain that have killed scores of people, but as of this writing had yet to comment on the Jackson Society report.

“The trust has been connected with a number of mosques where radicalisation has taken place. Specifically, in the case of a group of young British men from Cardiff, it has been suggested that attendance at the Al-Muntada-linked al-Manar Mosque was significant in their radicalisation and decision to travel to Syria and join the Islamic State,” the report said.

Qatar benefits from the report even if it does not emerge from it smelling like roses. The fact that the report attributes primary blame to Saudi Arabia and identifies other Gulf states as well as Iran is likely to strengthen Qatar’s argument that the Saudi-UAE-led boycott is an attempt to undermine its sovereignty and that the solution to the Gulf crisis should be one that addresses problems of funding of extremism on a regional basis.

It is an argument that will resonate with many, but is unlikely to contribute to resolving the Gulf crisis unless all parties are persuaded to step back from the brink and sit around a negotiating table. So far, there is little indication that the Saudi-UAE-led alliance is willing to heed calls for a dialogue. Complicating mediation efforts is Qatar’s demand that the Saudi-UAE-led alliance lift its boycott before any talks get underway.