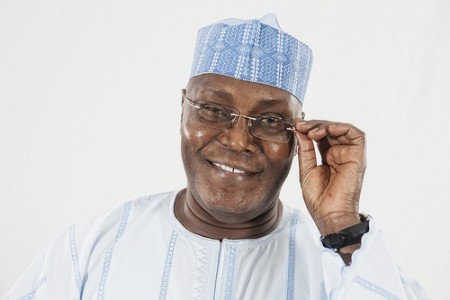 Rising from a meeting in Yenogoa, Bayelsa state on Saturday, some leaders of former militant groups, under the aegis of the Leadership, Peace and Cultural Development Initiative, declared Mr. Abubakar unwanted in the Niger Delta, accusing him of using the region’s oil wealth to fight against its interest-which is President Goodluck Jonathan.

“It is unfortunate that Atiku who has benefitted so much from the Niger Delta oil is leading dissidents in a political coup against the first southerner to ever ascend the seat of president of Nigeria,” the group’s president, Reuben Wilson, said.

“We are aware of his vast business interest in the Niger Delta and we are warning him in his own interest to stay off the region. He cannot be enjoying our oil money and at the same time use the same money to fight the owners of the oil.

“What we thought we would be hearing from the north was how the federal government will implement the spirit and letters of the amnesty programme.”

Mr. Wilson said the former vice president’s decision to split the party demonstrated the north’s agenda of discrediting the president to reclaim power in 2015.

“We dare say that they have misfired. What we expect Atiku to do in the next seven days is for him to apologize to the president for the public embarrassment. He has misled so many people, including the Rivers State governor, Rotimi Amaechi, who has abandoned governance in his state to follow the anti Jonathan apostles,” Mr. Wilson said on behalf of the group.

They also warned Rivers State Governor, Chibuike Amaechi, to change his anti-Jonathan stance or face the wrath of the people.

A youth leader in the region, Timi Frank, on Sunday, dismissed the threat against Mr. Abubakar as “empty and falling flat of common sense.”

“It is on record that the Niger Delta region and it’s youths have benefited immensely from the vast business interests of the former Vice President even as till date it remains to be challenged that Atiku remains the single highest employer of labour in the Niger Delta region and has empowered both investors and politicians from the region like no other Nigerian has, making him the bridge builder between the North and the South South region,” Mr. Frank said.

The Arewa Consultative Forum urged the ex-militants to withdraw the threat in the interest of peace, national cohesion and stability of Nigeria.

The ACF asked the former fighters to withdraw the declaration of Mr. Abubakar a “persona non grata”, over his role in the crisis currently rocking the Peoples Democratic Party. The group warned that the decision was “misguided” and “counterproductive”.

“Threats such as the one from the Niger Delta ex-militants are a negation of dialogue and the political process playing itself out on account of the breakup of the PDP into factions,” the forum said in statement signed by its National Publicity Secretary, Anthony Sani.

“…the ex-militants are by their misguided action crossing the fiducial mark that is alien to democratic tenets,” the statement by the northern body said Sunday.

“This is because democracy is not matter of threats and intimidation, but contest of ideas and reasons,” the group said.

Disturbed by the latest turn in the power tussle within the Peoples Democratic Party (PDP), the Muslim Rights Concern (MURIC) has condemned the sealing off of the Abuja secretariat of the new PDP, describing the action as dictatorial.

In a statement signed by its spokesman, Ishaq Akintola, the group wrote: “Armed riot squad of the Nigerian Police took over the premises of the new secretariat of the breakaway Baraje faction of the Peoples’ Democratic Party (PDP) at Plot 4, Oyi River Crescent, Maitama, Abuja on Saturday, 8th September, 2013. Nobody was allowed to enter the building.

“It will be recalled that seven governors, several senators and members of the House of Representatives had formed another faction of the PDP after the unsuccessful convention organized by the party. The Muslim Rights Concern (MURIC) considers this development very unhealthy for democracy. The fact that the issue is still before the court which had asked the two parties to maintain the status quo makes the police action on the order of the Tukur-led PDP leadership premature, illegal and unconstitutional.”

Mr. Akintola, a professor, also stated that the police action was suggestive of panic and confusion within the old PDP. MURIC advised the Tukur group “to put its house in order through genuine dialogue which guarantees the dignity of each politician in its fold and caters for the interest of every stakeholder instead of heating up the polity with police action. We are disappointed that a government that swore to respect the law courts and to make the rule of law a cardinal point resorts to an illegitimate police action. By its body language, the Jonathan administration continues to prove to Nigerians that it has not learnt from history. The collapse of the First Republic was not unrelated to the use of police to haunt and harass the opposition.”

On the withdrawal of police officers who were part of the security detail of Governor Rotimi Amaechi of Rivers state, MURIC said it was important to “alert Nigerians about the danger posed by this phenomenon. Chief Bola Ige, former Minister of Justice, was assassinated a few minutes after his police escort technically ‘withdrew’ a few meters away.”

The group warned that Nigerians “will not stomach any political assassination this time around. The old PDP led by Alhaji Bamanga Tukur should learn to brook dissent. Resorting to a show of force can only allow the crisis to escalate.

“We charge the judiciary to stand firm and resist pressure from the ruling party. As an integral part of the Realm, the judiciary is the last hope of the oppressed and any sign of weakness on its part will be an invitation to anarchy. Nigeria’s democracy would remain a farce if the ruling party is allowed to get away with contempt of the court.”