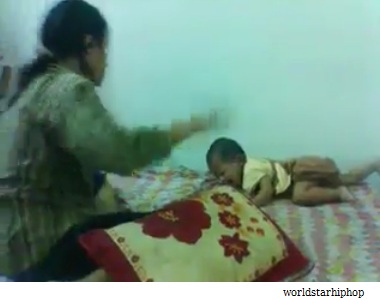 Updated May 11th with petition information

Thousands of netizens are up in arms over a viral video clip that shows a woman abusing a baby.
In the shocking 4-minute long video, which was shared more than 16,000 times on Facebook, the woman violently hits the wailing baby girl with a pillow, pinches her arms and thighs and kicks the crying child, who lies screaming on a mattress.

The beatings intensify when the baby refuses to remain quiet and cries louder, crawling towards the woman.  At one point, the woman throws her mobile phone at the child.

The voice of another woman, assumed to be the person recording the incident, can be heard in the four-minute long video as well.

While she admonishes the woman who is beating up the child, she does nothing to stop the abuse. At around, the 2 minute 20 second mark, she is heard telling the woman who is hitting the baby that she is going to kill the child.

Related: NewsRescue- Young Father Beats Daughter to Death in India Because He Wanted a Son

Responding to some 300 complaints made in a span of just hours, the police released a immediate statement on its Facebook page to clarify that the incident took place on May 29 last year in Petaling Jaya and the perpetrator – the baby’s mother – had been arrested on the same day. The woman was charged and found guilty under the Child Act 2001 is now serving an 18-month sentence. However, the police did not mention why and how the video managed to surface recently.
–Yahoo

More than 40 million infants are abused worldwide every year and according to the WHO, 57,000 children die from it. In “shaken infant syndrome,” a common form of infant abuse which occurs when the abusive parents vigorously shake their infants, intracranial and retinal hemorrhages and also chip fractures of the extremities are discovered at examination. The victims are children under one year of age.

Child abuse reports correlate strongly with alcoholism and drug usage among parents but are not limited to these.

Signs to look for in infants suspected to be abused include, changes in appetite, complete loss of interest in food, vomiting and often gagging.  Interruptions in sleep pattern and other signs of emotional stress may be noticed. Suspected cases should always immediately be reported to the authorities. 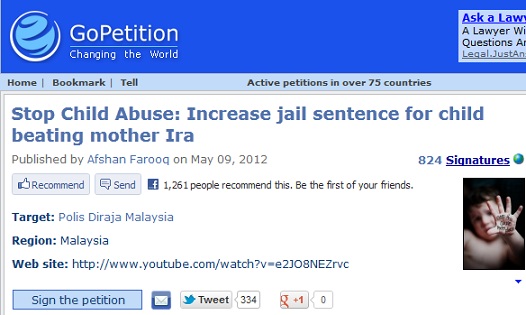