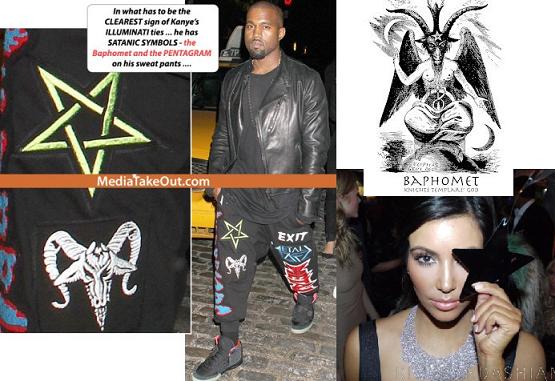 NewsRescue Editor- It is accepted knowledge that the likes of Kanye West, Jay Z, D’banj and other celebrity Illuminati are merely low rank, Illuminati distractors. Their job is to keep the masses distracted, while the corporate Illuminati seizes the worlds finance  via bubbles and bursts, ‘bailouts,’ bankers deposit usurps, REDD carbon-credits, wars for oil and other government level and UN grand schemes.

Are Kim Kardashian and Kanye West picking a name for their new baby as an homage to the Illuminati?

That’s what several gossip websites have been reporting over the last couple of days, as it appears the celebrity couple are considering naming the baby Khrist with a K, a supposed act of blasphemy that has some Christians up in arms.

“According to a new report, Kanye is taking something from his supposed Illuminati affiliations and naming the baby “Khrist”—with a K.” reports Gather.com.

MediaTakeOut.com asks if Kanye and Kim are taking their whole Illuminati shtick to a whole new level by naming their child after the son of God.

This comes off the back of a separate rumor that Kanye West is set to name his new album ‘I Am God’.

As the video above documents, West has not shied away from attempting to communicate the idea that he is part of the infamous secret society, wearing symbols such as the Baphomet, the symbol of the Church of Satan.

How important is this Illuminati gimmick to the hip hop industry? Recall that a wannabe rap star Wafeeq Sabir El-Amin recently tried to launch his career by killing his friend as a sacrifice to the Illuminati.

Christians are already making YouTube videos accusing Kanye and Kim of engaging in blasphemy for naming their baby Khrist with a K, citing Titus 1:16, which states, “They claim to know God, but by their actions they deny him. They are detestable, disobedient and unfit for doing anything good.”

Whether or not you think Kanye and Kim are actually part of the Illuminati or have just hijacked it as a trendy gimmick, the fact is that they are part of a mass entertainment juggernaut that keeps millions upon millions of people distracted while the real Illuminati, the power elite, goes about their business in relative secrecy.