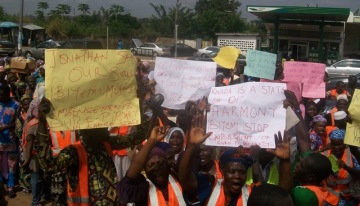 The Kwara State Coordinator of Subsidy Reinvestment and Empowerment Programme (SURE-P), Mr. Moses Ibiyemi has alleged that the protest by beneficiaries over non-payment of their three-month stipends by the authorities is sponsored.

Ibiyemi, who spoke with some members of the Press yesterday, said those who protested the non-payment of stipends are not true beneficiaries of SURE-P.

His words: “Reports reaching me confirmed that a number of people, who certainly are not beneficiaries of SURE-P in the state, are going around protesting non-payment of their stipends. In the first instance, they are not our beneficiaries.

Secondly, if you are not a beneficiary, you have nothing to look up to. When we started about one and a half year ago, about 3,500 people were engaged. At the end of July this year, all of them were still working. The system we operate in SURE-P is community-based. In fact, our real name is community services scheme”

However, the protesters who marched on some streets of Ilorin, the state capital, accused the scheme’s State Coordinator of mandating them to be card carrying member of the Peoples Democratic Party (PDP) before they can be paid.

A coordinator from Isin Local Government Area, Bakare Adekunle, alleged that Ibiyemi planned to disengage beneficiaries who were not in his party.

The protesters headed to the Government House in Ilorin, and met with the Deputy Governor, Peter Kishira, who begged for calm and promised to investigate the allegations against the SURE-P management to avoid a breakdown of law and order.