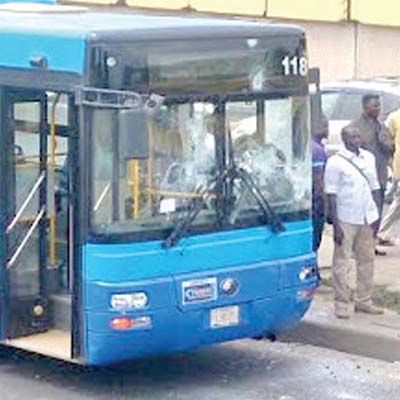 THERE was pandemonium yesterday at Maryland on Ikorodu Road, Lagos as street hawkers protested the killing of one of them by a truck.

The deceased was fleeing from the officials of Kick Against Indiscipline (KAI) who were arresting street traders on the highway.

At least, 14 vehicles be­longing to the Bus Rapid Transport (BRT) and that of the Rapid Response Squad (RRS) of the Lagos State Police Command were destroyed.

A witness, Ebuka Izuegbune, said: “At about 12.30pm, we were at the BRT bus-stop, when we saw KAI of­ficials with some policemen chasing street hawkers. One of them was knocked down by the truck.

“Some hoodlums hijacked the clash, robbed passers-by, Quick in­tervention of RRS men led by their Commander, Mr Tunji Disu, saved the situation. The police wanted to remove the body, but they were prevented from doing so, until the policemen dispersed them with tear gas.”

A senior police officer, who spoke on condition of anonymity said: “The KAI officials were doing their legitimate duty when the hawkers started running away. Unfortunate­ly, one of them ran into a moving vehicle and was crushed. The other hawkers went berserk and started destroying vehicles.

“When we got a distress call, we wanted to remove the body, because, that would have been the first and proper thing to do, but we were pre­vented from doing so. We called for more men and the RRS Commander came in full force and dispersed the hoodlums with tear gas. That was how we were able to remove the body which had been deposited at the mortuary.

“We have arrested five persons in connection with the public distur­bance. We have moved the damaged BRT buses to the Lagos State Traffic Management Agency (LASTMA) of­fice. The truck that crushed the vic­tim is in our custody too,” he said.

A hawker, Ikechukwu Okoro­afor, said: “We are being treated like animals in Lagos. We have refused to go into crime, yet, they wouldn’t let us be. How does the government want us to survive? We have not committed any crime ,but looking for our daily bread. Let the state government enforce the law on prohibition on commercial motorcycle riders (Okada). The Okada riders on our express roads are all northerners, armed with daggers and other dangerous weapons. The police are afraid of them, but they are af­ter us because, we are not armed.”

As a result of the clash, there was traffic gridlock and passengers were stranded as commercial bus drivers avoided the route for fear of their vehicles being vandalised by the rampaging hawkers.

The state Police Public Relations Officer (PPRO) Dolapo Badmos, who confirmed the incident, said: “KAI officials were enforcing the order against street hawking and the hawkers were fleeing to evade arrest, in the process, one of them was crushed by a moving vehicle.”

“We don’t know what happened, whatever it is; it is something that has to do with the government or the police.

“But does that give aggrieved people the right to destroy private property.

“People are saying that there are no jobs in Nigeria; we have cre­ated over 2,000 jobs in the last six months. Is this the reward we will get for it?

“We need to start asking our­selves serious questions in this country.

“They have destroyed over 14 of our buses now. I don’t even know how many they have de­stroyed now. For what, what did we do; I am angry.

“I don’t even know where to begin because there is no justi­fication for destroying private property; our service is for the masses.

“Do you know how many peo­ple would be stranded today if we don’t go out to pick them up?

“How are they going to get home? We do this for the masses. Is this the reward that we will get? This is madness.”