Below is the translated version of the letter sent to Sultan Barquq of Egypt, by Mai Uthman b. Idris of Borno in c. 1390 as produced by late Prof. M. Al-Hajj in “Studies in the History of Pre-colonial Borno”

Letter From Uthman B. Idris, the Sultan of Borno to Barquq, the Mamluk, Sultan of Egypt c 1391 A. D.

Praise be to God to who created writing as a means of communication between distant men, an interpreter between neighbors , a vehicle of greeting between friends, a source of delight among the ulama and a sorrow among the unlettered. Verily, had it not been for it, communication would have ceased and transaction would have become impossible. And blessings of God be upon our Chosen Prophet and noble Messenger with whom God has closed up the door of prophet-hood and sealed it – verily he is the last Messenger commissioned to carry good tidings, warn and call to God, and the bright lamp that kindles over the ages as longs as pigeons coo and dawns follows sunset. After him come Abu Bakr, Umar, Uthman and Ali, may God be pleased with all of them.

From him who depends on God, the Exalted, the noble king, the sword of Islam, the spring of the orphans, the brave warrior, the protector of affairs of the Merciful, the victorious commander at every time and place, the just and pious ruler, the pride of religion, the ornament of Islam, the ‘pole’ (qutb) of sainthood, the descendant of noble forefathers, the cave of secrets, the bright lamp, king Abu Amr Uthman son of al-Hajj Idris, the deceased Commander Of The Faithful(amir al-mu’minin), may God bless his grave and preserve his kingdom for his offspring [These words emanate from the tongue of our scribe and not from ours, since we do not boast].

To the great king of Egypt, the blessed land of God, and the center of the world. Greetings more pleasant than the scent of musk and sweeter than the fresh rain water, may God expand your kingdom and increase your authority. And greeting also to the members of your court, your jurists, your ulama’ who teach the Qur’an and other sciences, your community and your subjects, all of them. 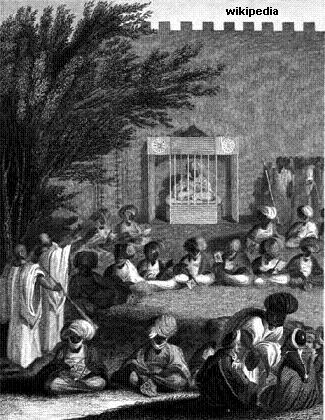 Next: we have sent you our envoy, my cousin Idris bin Muhammad, in connection with a problem which we encountered. The Arabs called Judhama, and others have enslaved our free subjects – women, children, weak men, our relatives and other Muslims. Some of these Arabs are polytheists, apostates outside the fold of Faith. They raided the Muslims and killed a great number of them during a war which broke out between us and our enemies. In the course of that war they killed our king Amr bin Idris, the Martyr – that is our brother, son of our father al-Hajj Idris bin al-Hajj Ibrahim. Verily we are the children of Saif bin Dhi Yazan, the ancestor of our tribe who was an Arab from the clan of Quraish, as we have learned from our teachers.

These Arabs have ruined our land, the country of Borno, and have taken our free subjects and our Muslim relatives as captives; some they sell to traders from Egypt, Syria and other places, and some they keep for themselves as domestic slaves.

Verily God has placed in your hands the government of Egypt from the Sea (ie Mediterranean) to Aswan, but your dominion have become a marketplace. Send forth messengers to all your lands, to your emirs, your vezirs, your qadis, your governors, your ulamas and your market supervisors; let them conduct an investigation and inquiry into this affair. If they find our people let them release them, from the hands of those who hold them captives, and put them to the test. If they say “We are free men – we are Muslims” believe them and do not regard them as liars. And after you have ascertained this, release them and allow them to return to their liberty and Faith.

Some of the Arabs indeed spread corruption in our land and are good for nothing. They are ignorant of the Book of God and the Sunna of our Messenger, and they regard wickedness an attractive occupation. Fear God, therefore, and do not let them enslave and sell our people.Verily, God the Exalted said: “Believer – men and women – are friends of each other; they command the good and forbid evil”. He said to his Prophet : “Judge among them according to what God has sent down, and do not follow their passions”. He said : “Had it not been for the restraining power which God gave to some men over others, the Earth would have been ruined”. The Prophet peace be upon him used to say : “The Sultan is the shadow of God upon earth at which the wronged takes refuge”. He said : “Believer are like buildings, they support each other up to the Day of Resurrection”. He said : “A believer is the brother of another believer; he must not treat him unjustly or hand him over to the enemy”. In philosophy (hikma) it is said : “The obligation of commanding the good is incumbent upon those who have dominion over the Earth (that is to say, the sultans) and among those who are associated with authority (that is to say, the qadis, the governors and the emirs). The injunction that it is sufficient for those who have no power to remove evil by physical force, to condemn it with the tongue refers to the jurists and the ulama’. Condemnation with the heart refers to the commoners among the Muslims.

We beseech you – may God make your life prosperous in your land – to command those wicked Arabs to desist from their evil. Verily God the Exalted said : “Those who have undertook the jihad on account of us we will guide them to our path; verily God support righteous men”. The Prophet, peace be upon him said : “ You are shepherds all of you, and you are in charge of your herds “. In philosophy it is said : “Had it not been for the sultans some of you would have eaten up others”. God the exalted said to his Prophet Dawud, peace be upon him : “ O’ Dawud, We have appointed you a caliph upon the earth, judge between mankind justly and do not follow the passions that lead away from the path of God. Verily, those who go astray from the path of God will receive sever punishment, because of their negligence, on the day of Reckoning”

Peace be to him who is guided.

Uncovered by Abubakar Gambo on fB