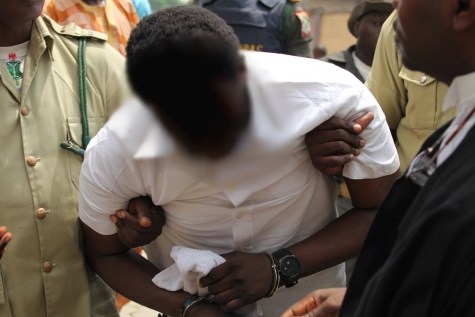 An Ondo State High Court sitting in Akure, on Fri­day sentenced a mid­dle age man, Tope Ekundayo to death by hanging for stealing N30, 000 in a robbery attack.

Ekundayo, 38 had been standing trial before the court presided by Justice William Ola­mide for a two count charge of armed robbery and conspiracy to commit robbery. He was said to have carried out the robbery at Adebobajo area of Akure last year and was found guilty as charged.

According to the charges brought against the suspect in court by the Counsels to the state government, Mrs Sola Adeyemi-Tuki and Mrs Jumoke Ogunjebi, they told the court that the con­vict had carried out the crime at Adebobajo area of Akure where he robbed one Ibekwe Mercy of the sum of N30,000 and other valuables at gun point but was later apprehended by law enforcement agents.

The two counsels also pro­duced five witnesses against Ekundayo in court.
Although counsel to the accused, Mrs Toyin Asake of the Nigeria Legal Aid Coun­cil, pleaded for leniency for her client being a first offender, the trial judge, Justice Olamide Wil­liams in his judgement ordered that Ekundayo should die by hanging to serve as deterrent to others.

Justice Olamide said his judgement was based on the evidence brought against Ekun­dayo by the prosecuting coun­sel which shows that the suspect was armed during the operation.