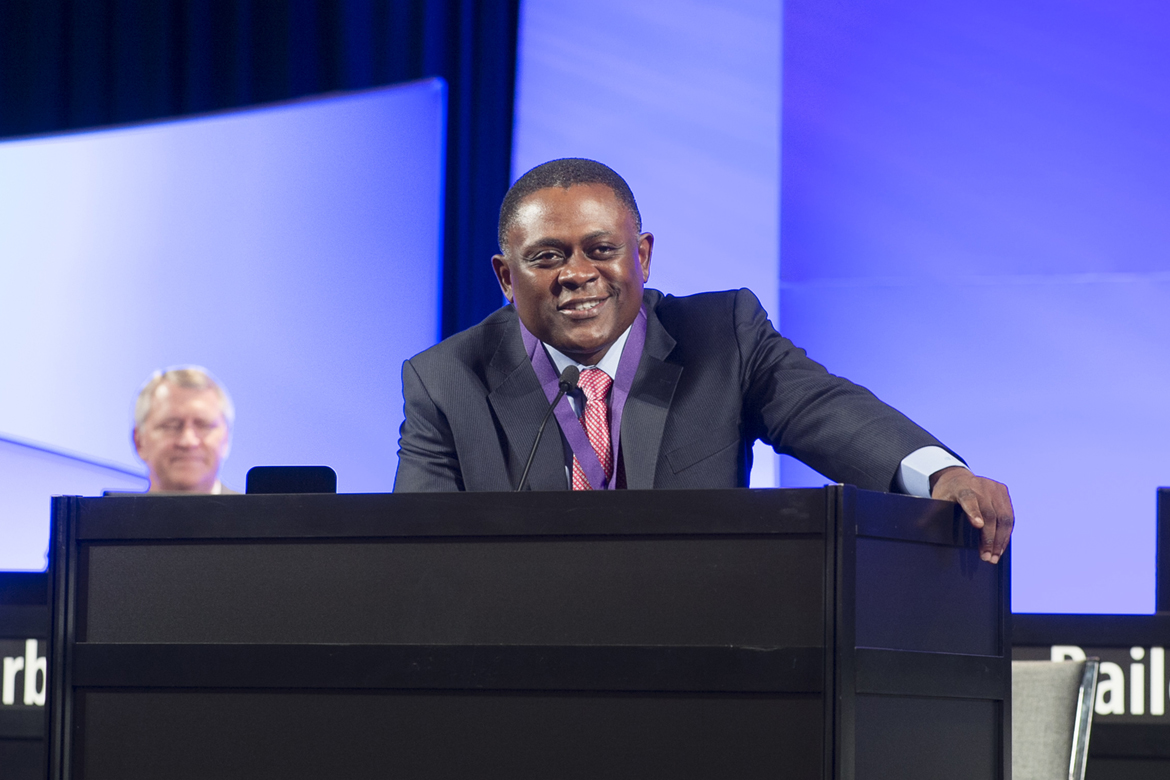 Chronic traumatic encephalopathy (CTE) was first diagnosed in an NFL player in 2002, and it has since been confirmed by postmortem examination in dozens of American athletes. The physician who made the initial discovery, forensic neuropathologist Bennet I. Omalu, MD, MBA, MPH, overcame massive efforts to discredit him and his research, and today CTE is widely recognized as a health risk in millions of patients with histories of repetitive brain trauma, including military veterans. The AMA on Saturday honored Dr. Omalu with its Distinguished Service Award during the opening session of the 2016 AMA Interim Meeting, in Orlando, Fla.

Dr. Omalu was working as a forensic neuropathologist in Pittsburgh when he conducted postmortem examinations of former NFL offensive lineman Mike Webster’s brain and spotted what would become the hallmarks of CTE.

“When I looked at his brain and he had diffuse amyloid plaques everywhere and there were no neuritic plaques … I took the slides home with me,” Dr. Omalu said in a 2015 interview. “I spent six months with those slides. I saw tau randomly situated, and not reminiscent of any other dementia that I knew. My first reaction, when I went to the literature, was that I expected to find previous reports like this, but I didn’t find even one.”

He had the case published in 2005 and went on to identify CTE in postmortem examinations of numerous other former NFL players.

Dr. Omalu initially thought the league would be pleased to learn of his findings, but when they were presented at an NFL meeting on concussions in 2007, they were dismissed, and the league—through lawyers, physicians and other experts—went on to mount a coordinated effort to discredit Dr. Omalu and his research.

At the time, the Nigerian-born Dr. Omalu was not a U.S. citizen, and his immigration status was dependent on his continued employment. He stuck to his findings in the face of intense pressure, and in 2009—seven years after his discovery—the NFL relented and publicly acknowledged the link between concussions sustained in football and CTE.

“Because of the service Dr. Omalu has rendered to every player and every family member in the football and other sporting communities, I am delighted to present him, on behalf of the AMA, with the Distinguished Service Award—our highest honor,” AMA President Andrew W. Gurman, MD, said in a statement. “His meritorious service is all the more remarkable given that Dr. Omalu was relatively junior at the time of his discovery, having only completed his pathology residency a few years prior to describing CTE.”

Dr. Gurman said he strongly believes “that Dr. Omalu—by his work, determination and dedication—strongly exemplifies the best of American medicine.”

Nominated by the AMA Board of Trustees and endorsed by the House of Delegates, the Distinguished Service Award recognizes a member of the AMA for meritorious service in the science and art of medicine.

A 20-year member of the AMA, Dr. Omalu attended medical school at the University of Nigeria at 16. He became a U.S. citizen in 2015 and now serves as chief medical examiner for the San Joaquin County Coroner’s Office in California and is a clinical associate professor in the University of California, Davis, Department of Medical Pathology and Laboratory Medicine.

The story of Dr. Omalu’s CTE research and the pressure he faced from the NFL inspired the 2015 film “Concussion,” in which he was portrayed by Will Smith.

At the 2016 AMA interim Meeting, delegates voted to adopt policy supporting research into the detection, causes and prevention of injuries along the continuum from subconcussive head impacts to conditions such as CTE. There is a high burden of risk of CTE in the U.S., with an estimated 1.6 million to 3.8 million concussions occurring each year, according to the Centers for Disease Control and Prevention. Research at institutions such as the Boston University CTE Center is investigating methods for antemortem diagnosis of CTE. The symptoms of CTE—which include worsening attention, concentration and memory—are insidious, sometimes occurring more than 10 years after the inciting event.