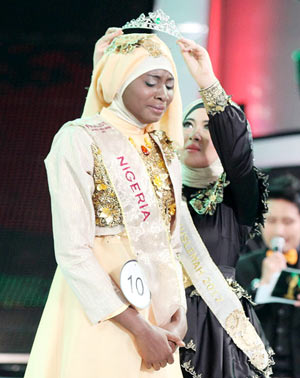 I listened and watched with amazement comments from people who tagged themselves liberal Muslims rationalising the show of shame in Indonesia last week where a Nigerian Muslim Obabiyi Aishah Ajibola was crowned the Miss Muslimah World. More stupefying is that those who ought to know and point out where the organisers of the pageant goofed and where the pageant is antithetical to Islam rather chose to celebrate it. Very unfortunate.

Woman, as taught by Islam since the light of Islam, is a precious and most valuable being.  She is to be protected, honoured, treasured and valued. And like a treasure, her beauty should be respected, hidden for the purpose of her security and safety so as not to be exposed to abuses by unworthy eyes and lustful minds.

The fact that in every pageant, flaunting, parading of the body and cat-walking are a common phenomena, the Jakarta show was not an exception in this regard. The alibi that the 21 contestants were adorned in the Islamic wears with hijabs did not remove the fact that they flaunted and cat-walked to the amused audience which were both sexes. That to a large extent must have whipped the emotions and passions of men present at the event.

So long as evidence from the Quran and Sunnah exists on lowering our gazes on women, all those men who sat to watch the catworking, strolling and poses of the Muslimah have run afoul of the injunction of Allah and the sunnah of Prophet Muhammad. (s.a.w). Didn’t the so-called liberal Muslims know that the philosophy behind the above warning is to make the ‘beauty’ of a woman private and not a public affair? Have they also pondered on the parametres for picking the winners?

Yes! they recited the Holy Quran but was it a Quran reading competion, No.  There were men not only among the audience but also among those who adjuged the the winner and losers. The Judges are  Puan Jameya Syerif; Dr. Baron Abdul Radzak; Fareed Esky and KH Amidan of Indonesia Ulama Council.  They tested the ladies on dedication, reputation, and concern to academics, religious knowledge, information technology and social community.

In one of the posts which I read immediately after the pageant; it reads: “The grand final of the third World Muslimah peagant at Balai Sarbini in South Jakarta on Wednesday also began uniquely — with the women reciting verses from the Koran before strutting down the stage, wearing loosely fitting outfits and veils instead of revealing gowns.

While some of the women paraded with a model’s confidence, others were more awkward as they tottered by in glittering high heels and long gowns.”

Again, what is the need  for a Miss World alternative? The argument that the Miss Muslimah World is a riposte to the Miss World is not enough to call Islmaic pageant when the religion does not support it. The Quran says in Surat Hud: “And do not incline towards the disbelievers.” Do not adore their ways and do not follow them. An hadiths also says ‘He who imitates a nation is from amongst them.’

Instead of concentrating their energies on dawah, and offer assistance to people struck with poverty and disease all over the world, show love to people, especially to people in war-ravaged countries, denounce war and inhuman treatments in some parts of the world, they decided to compete with the shameful competition of Miss World.  Islam has no hand in such matters.  We must reject in its entirety this rash invention. The organisers should have a rethink, and refocus their interest and perhaps remove pageant out of it.  Quran recitation competition is accepted world but with low publicity when  women are involved because of the reservation Islam has for women.

Islam preserves the woman’s right of modesty, guards her from the corruption of society and that no male other than her close relatives and her husband, has the right to behold her beauty. The Prophet said: “A woman should be concealed, for when she goes out, the devil looks at her.” (Tirmidhi, Hadith no. 3109) The adornment of a woman is a private matter and not what should be celebrated in the public. That is what Islam teaches. Period.

“It’s against the principles of Islam”  – Lukman Idris

This Muslim pageant thing was sheer vainglory. This waywardness and has no basis in Islam as much as it does not in Christianity.

Looking at the exercise, it’s a way of showing off the even though they were wearing Hijab which are fashionable.

Also, during the exercise you will see men either Muslim or non-Muslim who will be commenting on their beauties and also being lustful. So, generally to me the pageant is totally against  Islam and I will advise the organisers to put a stop to it. This is a sign of end time.

It’s a show of shame — Nurudeen

Successful indeed are the believers. And Glory be to Almighty Allah who bless us with Quran and Sunnah. To say the truth, this show is never part of Islam, It is not a sunnah of the Holy Prophet Muhammed (SAW), It was not practiced by our predecessors. To everybody reading this article, This show can be described as show of shame, by the so called ignorant people whose intention is to tarnish the name of Islam. Well, everybody  shall be duely rewarded by our Creator according to individual actions .  For the non-Muslims ,  Islam is a way of life, and does not teach  beauty contest.

There is no alternative to what Allah has decreed. Better things are out there they can do to contribute to Islam not beauty pageant

As regards to Islamic believe,  the Islamic pageant is not advisable because God created women with some kind of attraction and in order to curb unnecessary emotions, women are required not to flaunt their beauty. Despite the fact that they didn’t expose their body,  men can still get attracted to them through their voices and the way they cat- walked. So, to me the pageant is against Islamic religion. Even if they want to test their knowledge or try to promote the Islamic religion through the recitation of Quran,  I think it should not be in that manner. Because as a woman in Islam,  it’s not proper to expose yourself in public.

When I heard about  it, I thought it was a rumou, but was surprised when I saw it myself and I was ashamed.

The event is totally un-Islamic, therefore Aisha as she claimed to be ,should repent and return all the prizes if actually she was a Muslim.The prizes are haram and the act, because Islam does not support pageant. But I think what they should have done is to just focus on the recitation privately and not by making it publicly. Even in Islam it is a sin for a lady to recite in the public except in a situation whereby you are either teaching or reciting to children.

Women are not allowed to flaunt their bodies

A Muslim woman is not allowed to flaunt her beauty in whatever form even in her Hijab (Islamic veil). So the concept of Miss Muslim World is alien to Islam and so not acceptable. The organizers of this programme should fear Allah and stop inventing this concept into Islam, for every innovation leads to hell fire . I think they should rather do charitable cause for Muslims who are living in abject poverty. Islam is a complete religion. Innovations like this is not allowed.