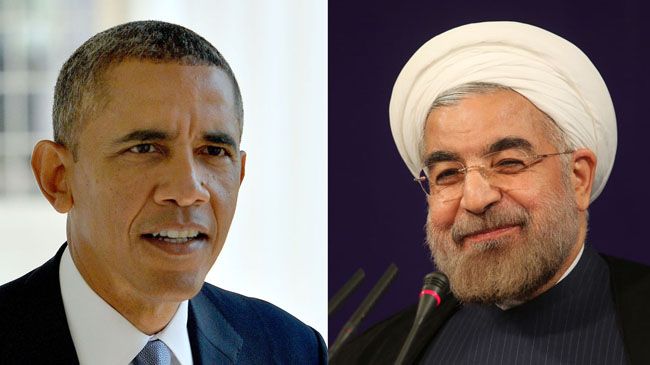 (CNN) — President Barack Obama spoke by telephone with Iranian President Hassan Rouhani, the first direct conversation between leaders of the United States and Iran since 1979.

Obama believes a comprehensive agreement is possible regarding Iran’s nuclear ambitions, telling reporters at the White House that “the test will be meaningful, transparent and verifiable action” and if proven would ease international sanctions in place against Iran.

Western leaders have expressed cautious optimism about Iran’s more moderate tone under Rouhani. Among other things, recent comments by Rouhani have given some hope that a deal could be struck over the Middle Eastern nation’s nuclear program.

During the conversation with Rouhani, Obama said he reiterated statements he made this week at the United Nations.

“While there will surely be important obstacles to moving forward and success is by no means guaranteed, I believe we can reach a comprehensive solution,” Obama told reporters at the White House.

On Friday, Rouhani said his election helped pave the way for better relations between the Iran and the West, which has imposed heavy sanctions on the country. He also said Iran wants quick resolution to the nuclear issue. Western leaders believe the country’s nuclear program is designed to produce weapons. Iranian leaders have said it is purely peaceful.

“I assure you that on the Iranian side, this will is there fully, 100%, that within a very short period of time, there will be a settlement on the nuclear issue,” he told reporters.

According to Rouhani’s posts, Obama told the Iranian president that he was “convinced relations between Iran and US will greatly affect the region.”

“@BarackObama to @HassanRouhani If we can make progress on #nuclear file, other issues such as #Syria will certainly be positively affected,” the president said in a follow-up message.

Rouhani responded, according to his tweet: “In regards to #nuclear issue, with political #will, there is a way to rapidly solve the matter.”

He also told Obama, according to his Twitter post, he was hopeful about upcoming meetings on the issue between representatives of Iran and the permanent members of the U.N. Security Council — the U.S., China, Russia, Britain and France — as well as Germany.

“@HassanRouhani to @BarackObama: I express my gratitude for your #hospitality and your phone call. Have a good day Mr President,” Rouhani said in post on Twitter.