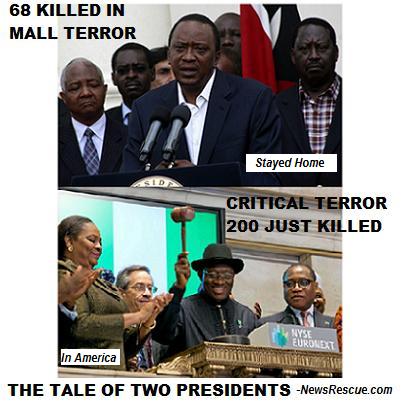 NewsRescue– This is a short tale by Idris Abubakar Katagum.

President Uhuru Kenyatta of Kenya rightly canceled his trip to New York for the 68th UNGA, sequel to the Al Shabaab terror attack at a Nairobi Mall which left about 68 people dead and several critically injured.

President Goodluck Jonathan hopped into the Nigeria Airforce Presidential jet with an army of hanger ons and dozens of aides, numbering only God knows how many, en route New York to go and ring a bell in a week where over 200 Nigerians were killed by Boko Haram terrorist (148 in Borno, 68 in the Ombatse cult clash in Nasarawa and Apo 9 by the SSS Terrorist arm).

He did not condole with Nigerians who were affected directly or indirectly, he did not utter a single word on the terrorist attacks in Nigeria, but was among the first to condole with Kenyans and even offer to assist Kenya prevent a re-occurrence of the heinous Al Shabaab terror attack.

Which of these two leaders will you take seriously? The one who canceled his trip to New York and stayed with his people in troubled times or the one who jetted out to New York to ring a bell while his citizens were being killed in hundreds?