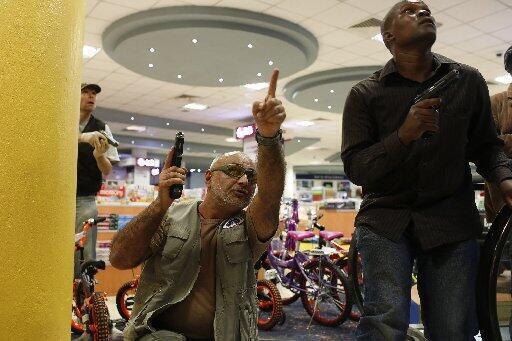 Three American names were listed by terrorists in a tweet, as being involved in the Kenyan murder and hostage taking mall saga. Two of the Americans are allegedly from Minnesota, and the third hails from Kansas City, Missouri. With increasing American and western involvement in wars all over the Middle East and Muslim world, dealing and engaging with radical extremists, there is great trepidation in Europe, most especially of those who return from fighting in Syria where the western world is encouraging a war aided by terrorists against the government. An upsurge in spontaneous terror of the kind seen in Kenya, with westerner involvement is predicted.

Four Britons, an elder Ghanian, Prof. Kofi Awoonor, and other foreigners including a Tasmanian man, Ross Langdon have been killed among a majority of Kenyan dead. Multiple explosions were heard from the Mall in the third day as a coordinated rescue effort had rescued most hostages. So far 62 have been listed killed, while the security forces have killed 3 terrorists and arrested 10 others, according to latest reports.

The United States meanwhile has been preparing Al-Shabaab targets in Kenya and neighboring nations which it intends to strike at in aerial operations in the upcoming days. This is the predictable and consistent response of the United States which is engaged in countless official and unofficial wars in nations across the world, with air strikes and drone attacks in dozens of countries on a daily basis. Drone attacks has come to be known as the Obama doctrine, and the current US administration’s only foreign policy and peace tactic.

Somalia has been without a recognized central government since 1991, when the President Mohamed Siad Barre was overthrown. Al-Shabaab militant group is a 15,000 strong radical Somali terrorist group and off-shoot of the Islamic Courts Union (ICU), after the courts were defeated in 2006 by the Western backed Somali Transitional Federal Government (TFG) aided by international intervention through western organized military action of Ethiopia and Kenya.

Guardian: “Many blame international involvement, including by the US, for exacerbating the situation by picking sides in the conflict and pitting factions against one another. The rise of al-Shabaab – an al-Qaida inspired group that emerged from the courts movement in retaliation against what was seen as the interference of foreign powers – has brought an increasingly unpredictable element to the conflict.”