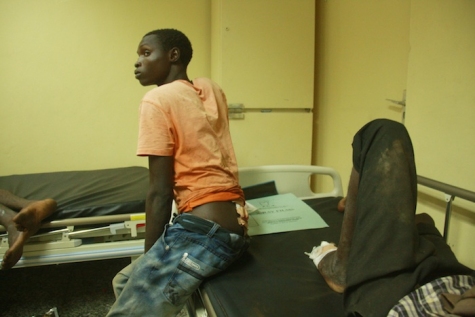 Some 17 survivors of the pre-dawn attack carried out by the Nigerian military have denied being members of Boko haram. The survivors who spoke to journalists in their hospital beds said they were shot by yet-to-be identified gunmen that killed seven occupants of an uncompleted building in Apo Legislative quarters’ Abuja early on Friday.

SaharaReporters can authoritatively confirm that the eight persons shot and killed by Nigerian security agents in Abuja today were in no way linked to the dreaded Boko Haram sect as claimed by the spokesperson of the Nigerian secret police, Marilyn Ogar.

The scene of the massacre was an uncompleted building at Bamanga Tukur Street in the Apo Legislative Quarters.

Seventeen of those who survived the pre-dawn onslaught by uniformed men of the Joint Task Force (JTF) spoke to us on their hospital beds in Abuja, all of them vehemently denying being members of Boko Haram.

One of the survivors said they are day labourers who work in the city to make ends meet, and later squat in uncompleted buildings by paying the guards attached to those buildings.  This morning, he said, they were woken up by a surprising hail of bullets from the uniformed soldiers.

Providing some background, he disclosed that an emissary of an army general had given them a five-day quit notice but that today’s slaughter was carried out before they could move from the building.

SaharaReporters saw sleeping mats and cooking utensils belonging to the squatters as well as blood splattered on the walls of the building from the unusual attack on innocent civilians by the Nigerian military claiming to be fighting Boko Haram.

Nigerian security agents insist that they killed the civilians after they first came under attack while trying to dig out weapons hidden underground by the insurgents, but one of the injured squatters told SaharaReporters categorically that the soldiers fled the scene after finding out they had killed innocent civilians.

“It was after the attack that some policemen and the SSS came to the scene and even tried to help those of us that survived to get to hospital,” he said.

Uncompleted building where squatters were slaughtered by security agents

Bloody wall inside after the killings

Sleeping mats of the squatters