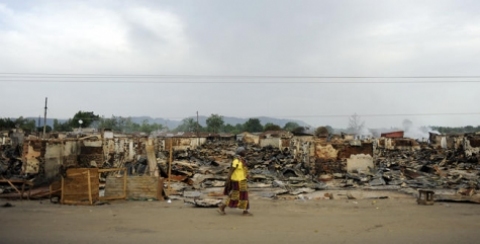 The Kaduna State Government has declared a 24-hour curfew in Kafanchan, Kaduna State, following bloody fighting between ethnic indigene groups in Southern Kaduna and settler elements of Hausa-Fulani dwelling in the area. In a telephone interview with our New York office, a security source told SaharaReporters that at least five persons were killed in the fighting.

The bloody clash was also confirmed by an elderly Yoruba resident of Kafanchan, an otherwise quiescent town that used to be known as a railway hub. The man said the assaults flared up again yesterday, after armed soldiers had earlier quelled a skirmish last Sunday.

The security operative disclosed that indigenes of Southern Kaduna and Hausa-Fulani youths engaged in a free-for-all fight using machetes, spears and a few guns. Apart from the dead, many people also sustained varying degrees of injury.

The source said, “I can confirm to you that attacks started yesterday between the indigenes and settlers. And several people were killed before [the] government declared 24 hours curfew today. As we speak, we are in the streets patrolling and all residents are now indoors.”
The security agent said yesterday’s attack appeared to be reprisals for the death of a young man who was killed last Sunday.

SaharaReporters could not reach the Kaduna State Police Commissioner, Mr. Olufemi Adenaike. However, a police officer in Kaduna said the commissioner and military authorities in Kaduna had deployed troops to the trouble spots to strengthen security and contain any threats that might escalate attacks.

The picture is a previous picture of 2011 post election violence in Kafanchan.