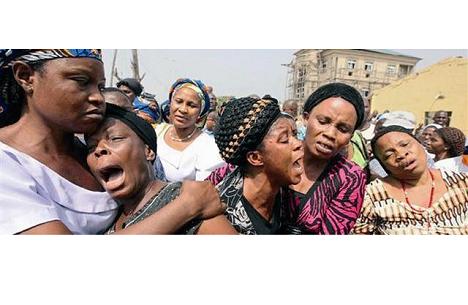 Women and children have continued to flee Benisheikh town in Kaga Local Government council of Borno State following the attack by Boko Haram sect, which left 143 killed, according to current figure.

Local environmental officials in Borno State had on Thursday continued to pick more corpses from bushes and road sides.

DailyPost reported on Wednesday that about 54 persons died in the attack staged on Kano-Maiduguri highway and the nearby village of Benisheik in which hundreds of homes were burnt.

But officials of the state environmental protection agency who moved along the road sides of the highway to evacuate corpses of civilians shot by bullets from Boko Haram gunmen, say there are more deaths than earlier reports.

“We have been picking corpses off the road sides all day, there are more in the bush, they are all travelers shot at or slaughtered by Boko Haram gunmen who were attacked on Tuesday night. We have so far picked up 143 corpses”, said Abdulazeez Kolomi, an environmental assistant.

The Head of the Environmental Protection Agency, Saidu Yakubu, who briefed the governor on their activity, later told journalists that the official figure of corpses evacuated was 87.

A soldier who spoke to correspondents in confidence said the insurgents had superior power.

“The terrorists were using anti-aircraft guns while we were using AK47 rifles and some RPGs. They came in droves, driving about 20 pick-up trucks accompanied with two light-armored tankers, all wearing military colors. We had to retreat to our base to reinforce after running out of ammunition,” he said.

“However, they followed us down and surrounded our base and began to shell our building. We couldn’t stand the heat of their superior fire power. We had to retreat into the village after they killed two of our soldiers and three policemen.”

The soldier said after the siege, the insurgents took away an armoured tank and four pick-up vehicles painted in military colours from the base.

Villagers who insisted on leaving Benisheik yesterday said the Federal Government was not sensitive to their plight.

“We are being killed by insurgents who live in the bushes but the some people in Abuja are saying they are winning the war, how?” asks Kande Ali, a mother of five.  “We have to relocate to safer places,” she added.

A resident of Benisheik, Abacha Wakil, said the Boko Haram gunmen invaded the town at about 7:45 pm after attacking the military base at the outskirts of the town.

According to him, “We all spent the night inside the bush. In the morning, we found that they had beheaded 14 persons, mostly those in the Civilian-JTF, and left with at least 21 vehicles and a truck filled with food items looted from the shops they also set ablaze.

Bashiri Takai a local butcher in Benisheik said “we spent the nights of Tuesday and Wednesday in the bushes because of fear for our lives. They killed 15 people here in the township and many travelers on the highways. There is hunger everywhere; and people are leaving”.

It was observed that there was general anger on the part of the few remaining villagers who felt both government and the military had not done enough to protect them in the two attacks they suffered in the last ten days.

However, speaking to the people, the Brigade Commander of the Army, Brigadier General Muhammed Idris Yusuf, who accompanied the Governor to Benisheik pleaded with the villagers not to lose confidence in the military.

He pledged a reinforcement of more troops to protect the town.

“We share your pains and we promise to beef up the presence of soldiers around Benisheik. We have not abandoned you as you think; our troops ran out of ammunition, that was why they withdrew to reinforce. They are now back and more are coming”, said Brigadier General Yusuf.

Borno State Governor, Shettima, also addressed the aggrieved youths and some few elders of the deserted town and promised to spend about $312,000 (N50 million) in rebuilding the destroyed village. – DaiilyPost & Trust

NewsRescue Editor- Where is the Nigerian Air force? Nigeria’s military once again appears to have retired, and left the mission to the Civilian JTF to defend the nations people.