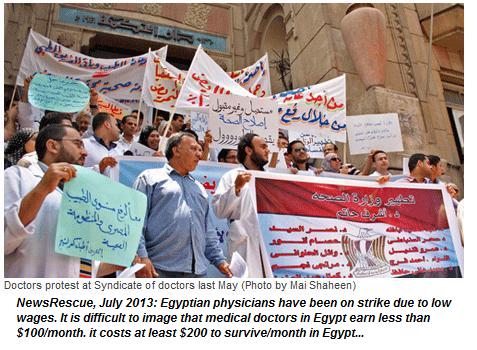 NewsRescue– We have severally presented the reality of the Arab spring to NewsRescue’s intelligent readers; that in reality, the Spring was never a quest for so-called democracy, but the manifestation of a global famine related to natural and man-made crises such as global financial/Wall street economic games–like futures–and other greed and exploitative imperialist machinations. As the Syrian war reveals itself for what it truly is–a foreign armed and run effort (impressed on famine riots) to topple an unaligned government, and not a civil war–with infighting among anti-Assad rebels/terrorists and the UN verified use of chemical weapons by Syrian rebels–the western media is beginning to admit to the reality of the true reasons for the intractable unrest in the Middle East and north Africa.

NewsRescue earlier articles on this:

CNN quietly affirms after 120,000 are dead thanks to foreign mischief, and the region is in irreversible turmoil:

Imagine a world where climate change – and a dwindling water supply – may have helped fuel Syria’s civil war.

Five years before Syria was awash in sectarian bloodshed, it was in the midst of a devastating drought – one of the worst in modern times.

The numbers are staggering.

According to the center for climate and security, from 2006 to 2011, the unprecedented drought scorched 60 percent of Syria’s land – killing 80% of the livestock in some regions, putting three quarters of the farmers there out of work, and ultimately displacing 1.5 million people.

And that was before the bloody conflict that has so far scattered four million more inside the country and sent two million refugees streaming across Syria’s borders.

While no one is claiming a direct cause and effect, the drought did bring on the diaspora from dying farms to over-crowded cities – and thereby put enormous economic and social pressures on an already fractious society.

And Syria is far from an isolated case.

Scientists warn that with severe water shortages in Yemen and other countries in the region, the climate of violent revolution may spread.

Water was also the stumbling block in peace talks between Israel and Syria 13 years ago.

That’s when Bashar al-Assad’s father, Hafez al-Assad, insisted on retaining a tiny stretch of the Sea of Galilee – or the Kinneret, as the Israelis call it – and which provides Israel with much of its water.

In fact, then-Prime Minister Ehud Barak ran on the campaign slogan: “no Syrian soldiers will splash their feet in the Kinneret.”