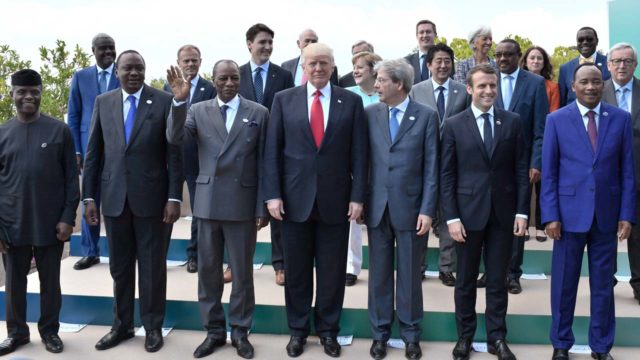 Nigeria’s Acting President Professor Yemi Osinbajo made it to the G7 summit in Sicily, Italy Saturday and returned to the country in the night.

AgP Osinbajo invited to ongoing G7 summit in Italy to represent Nigeria, leaves this morning and is expected back later in the evening today

SSA Laolu Akande announced his departure in the morning of Saturday after he had made a surprise visit to Garki market on Friday. Yemi Osinbajo met with President Trump of the USA, the leaders of France, Germany other world leaders to discuss issues which included terrorism and global warming.

He returned right away Saturday evening after his role at the summit.

His travel out of the country appeared brief amidst rumors of a coup and due to the apprehension that disgruntled extremists in Nigeria wish to orchestrate a coup or otherwise get rid of the Vice president. Osinbajo is not expected to leave Nigeria for more than hours at a time because Senate president Saraki, the next in line is a prime suspect.

Osinbajo’s departure was only announced after he was well into the conference.