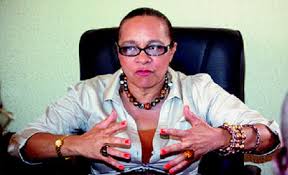 A leading Niger Delta activist and a delegate to the just concluded National Conference , Ankio Briggs has joined battle to stop the percieved ambition of the Minister of State for Education, Chief Barr Nyesom Ezebunwo Wike to take over the mantle from Governor Rotimi Amaechi who also comes the same Ikwerre ethnic nationality.

Though Barrister Nyesom Wike is yet to officially declare his intention to run for the number one political office in the state, series of adoptions and pronouncements from political associates points to the obvious.

Earlier , Chief Anab Sara-Igbe, Hon Elemchukwu Ogbowu and some other members of the Peoples Democratic Party inRivers state who have been diametrically opposed to the idea of another Ikwerre governor were expelled from the party by the Obuah led state executive of the PDP. Chief  Sara-Igbe who is a chieftain of the PDP has argued in line with zoning principle. He and others believe that it would amount to injustice for another Ikwerre person to mount the leadership stool of the state after governor Amaechi.

Those who have argued in favour of a Wike governorship ticket for the PDP believe that competency and not tribe should be the bases for choosing the party’s flag bearer in the forthcoming 2015 general elections. The “competency” premise is woven around the the Grassroots Development Initiative, a sociopolitical group which is believed to be founded and funded by Wike to actualize his governorship dream. As the 2015 general elections draw closer, anxiety seems to be fueling  and raising the tempo of the tussle as each opposing groups throw every thing within their arsenal so as not to be disadvantaged. Until the recent incidence at the Delta were gun shots were some physical confrontation, including some gun shots were recorded, the in fighting withing the PDP had been characterized by a cross fire of verbal diatribes.

The latest vocal shells were released by no other than the outspoken Niger Delta resource control Amazon, Ankio Briggs in response to a earlier comment made by Chief Wike on a radio program. “Those agitating for zoning should be bold enough to tell Rivers people the magic they hope to use to win the Presidential election for President Goodluck Jonathan they claim to support and the PDP, when all their council chairmen, councilors, commissioners and Special Advisers among others from their zones, villages, communities and local government areas are in the APC?”, Wike Challenged. “How then do you want to be given the governorship ticket by disenfranchising others when under your nose, all your people have joined the APC, you could not convince even one councilor to follow you, you have no party structure in your little ward. How then do you win the election and with votes?, the education minster further probed.

This is not the first time Wike would throw up such an open challenge. A few months back, while on a local radio station in Port Harcourt Wike openly boasted that he will easily beat any Kalabari or Ogoni aspirant in the PDP as they stand no chance against him. His comment attracted a large volume of criticism.

Responding to Wike’s latest outburst, Annkio Briggs posited that “The PDP leadership as presently constituted may be a secret cult group along with their allies since only a cult group can shut you out from questioning their clandestine and mischievous activities”. She went further to state that “, the chest beating, the huffing and puffing by few individuals that their selfish political actions will deliver Rivers State for President Jonathan is not true”. The foremost Niger Delta activist  said “Some of us have been in the vanguard of supporting President Jonathan even when those who today claim to be fighting for Jonathan were totally opposed to his presidency as far back as 2009. She added that Wike’s ambition was inimical to President Jonathan’s second term bid as it might prevent a 100% delivery of the votes. She however said if Wike or another Ikwerre man emerges as the flag bearer of the PDP, “we will not vote him”.