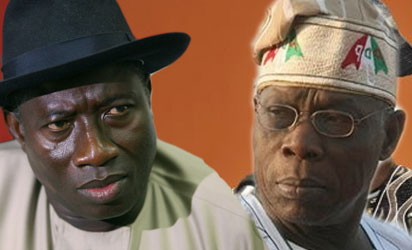 Ex-President endorses BuhariFormer President Olusegun Obasanjo has spoken of his fears for Nigeria and President Goodluck Jonathan, following the postponement of the general elections.Obasanjo, who was in Nairobi, the Kenyan capital, to present his 1,500-page autobiography My Watch, which has been banned in Nigeria pending libel hearings, was quoted by Financial Times as saying that “the signs are not auspicious” in the wake of the six-week postponement of the polls.He added: “I don’t know whether a script is being played.”The presidential election was slated for next Saturday, but the Independent National Electoral Commission (INEC) shifted it following the memoranda from security chiefs that they could not guarantee security for the elections because of their engagement against insurgency in the northeast.The delay should also enable Permanent Voter Cards (PVCs) to be distributed to the millions of voters yet to receive them and who were at risk of being disenfranchised, according to INEC chair Prof. Attahiru Jega.Obasanjo said: “I sincerely hope that the president is not going for broke and saying ‘look dammit, it’s either I have it or nobody has it’. I hope that we will not have a coup. I hope we can avoid it.”Speaking on whether he would like to return to politics Obasanjo was quoted in the interview as saying: “I am an old man and I’m enjoying what I’m doing now… And then you forget I am a farmer; I have to manage my farm.”For the first time, Obasanjo openly supported All Progressives Congress (APC) candidate Gen Muhammadu Buhari.“The circumstances (Buhari) will be working under if he wins the electionare different from the one he worked under before (as a military Head of State) where he was both the executive and the legislature — he knows that. He’s smart enough. He’s educated enough. He’s experienced enough. Why shouldn’t I support him?”