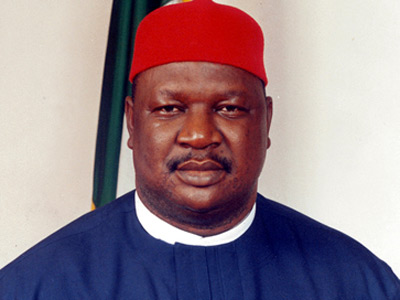 The National Vice Chairman of the Peoples Democratic Party, South-South zone, Cairo Ojougboh, has petitioned President Muhammadu Buhari asking him to investigate the immediate past Secretary to the Government of the Federation, Pius Anyim, over alleged multibillion naira scam.

Mr. Ojougboh, in a five-page letter, dated July 21, to Mr. Buhari, alleged that the Centenary City project in Abuja, which was built by the Federation Government but which construction was coordinated by the former SGF as part of the activities to mark Nigeria’s 100 years as nation, was a scam.

He said the government had no equity in the project and that Mr. Anyim, a former senate president, was the sole owner of the 3000 acres of the land owned by the Centenary City.

Mr. Ojougboh disclosed the contents of his letter to Mr. Buhari at a press conference he convened in Abuja on Monday to react to the protest by a group, New PDP Reformation Coalition and Support Groups.

Members of the group, led by one Danelsi Momoh, had during their protest at the national secretariat of the PDP on Monday, claimed that Mr.Ojougboh, a former member of the House of Representatives, was planning to contest for the position of the national chairman of the party and that he would ruin the platform if elected.

“Behind the threat to the PDP is the inordinate ambition of one man, PDP Vice Chairman, South-South zone, Dr. Cairo Ojougboh, in his quest to hijack the party for his selfish interest has contrived all manner of crisis to make sure the PDP dies,” the group alleged.

“It appears the plan is for Dr. Ojougboh to weaken the PDP and if possible rush it into oblivion to allow the APC operate without any credible opposition and thus set the ground for a large-scale misrule of the country.”

They also accused Mr. Ojougboh of masterminding the murder of some top politicians in the South-South region, including Aminasoari Dikibo of the PDP and Harry Marshall of the defunct All Peoples Party.

At the press conference… Read full on PT