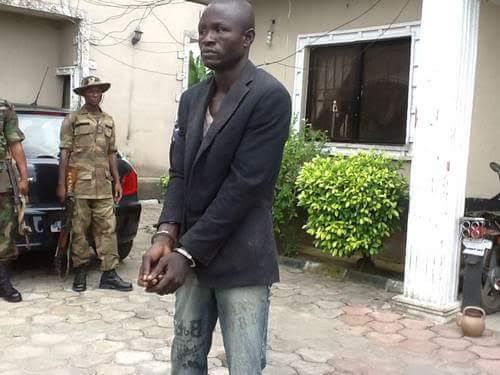 Once again a man has been sentenced to death for lesser crimes that get Boko Haram gentle sentences of life in prison. Even Boko Haram members who kill soldiers and bomb citizens to death are always given a pat on the hand with life sentences and even recently “rehabilitated” and released back into society.  Linda Ikeji reports:

Jackson Feutubobai, pictured above, was today sentenced to death by hanging by a Bayelsa state High court for murdering one Inspector Joseph Ofozini in Lobia II community in the Southern Ijaw Local Government Area of Bayelsa State on April 5th 2013. ‎Jackson was part of a gang that killed 11 police officers on the day of the incident.

The Presiding Judge, Justice M.A. Ayemieye while delivering her judgment, said that the sentence is mandatory for those accused of murder.

Commenting on the death sentence, the State prosecuting counsel, Arthur Andrew Seweniowor, said if jackson fails to appeal in the next three months, the state governor, Seriake dickson will sign his death warrant. Jackson’s counsel, Efieseimokumo Bipeledei, had earlier appealed with the court to temper justice with mercy, saying the accused person is a family man who has five children dependent on him.

Mr. Bipeledei urged the court to reduce the sentence to imprisonment.