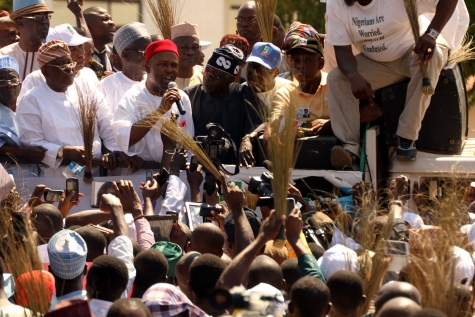 “We ordinarily wouldn’t have commented on the ongoing macabre dance in PDP, having left the torn umbrella since November last year for the All Progressives Congress (APC) for the good of our nation. We are, however, forced to set the records straight following speculations occasioned by President Goodluck Jonathan’s statement that the G5 Governors and some of us that have left the party would return following the forced resignation of Alhaji Bamanga Tukur and subsequent appointment of Alhaji Adamu Muazu our good old friend as the new National Chairman of PDP,” defunct nPDP National Publicity Secretary, Chief Eze Chukwuemeka Eze, said in a statement released in Abuja today.

Continuing, Chief Eze said: “For the avoidance of doubt, let me state unequivocally on the authority of the departed Governors and other stakeholders of the defunct nPDP that none of us, including the G5 Governors, members of the National Assembly or any stakeholder of the defunct nPDP, has any intention of rejoining PDP no matter the level of manoeuvring, coercion or enticement. We are not interested as we have left with the soul of PDP and Muazu can have the carcass of the party to revive if he has the ability. We are, however, convinced that he is doomed to fail but would only end up playing the unenviable role of an undertaker as PDP is a sinking ship destined to completely go under sooner than later based on the prayers of the good people of Nigeria and approved by God.”

We truly sympathize with our good old friend, Alh. Adamu Muazu as the PDP National Chairman as his woes started the very minute he was appointed when President erroneously stated that some of the G5 Governors that have left the sinking PDP will soon be back except Governors Amaechi and Nyako as Mr. president is so frightened by the principled and intimidating democratic credentials of these two forgotten that in the defunct nPDP we are one united family that cannot be separated and who are so determined to see to the end of the political misfortune that PDP has imposed on our nation.

The second woe of our good friend the new National PDP Chairman was the booby trap set up on the same day of his appointment by Governor Godswill Akpabio of Akwa Ibom in his usual double game aimed to ensure that Alh Muazu fails in this onerous task, according to Chief Eze, was when he awarded to President Jonathan an unconstitutional third term in office as President before the unsuspecting NEC Members of PDP. What a useless venture!

“These people that ensured that Tukur was disgraced out of office are hell-bent to ensure that Muazu also fails in the onerous task that has been entrusted on his shoulders,” Eze said.

The defunct nPDP spokesman expressed joy that “Bamanga Tukur has come to the realization, though very late, that none of us in the defunct nPDP hated him as we did all we could do to help him out of his present predicament but, sadly, he cooperated with his true enemies to turn against his true friends that made us to set up the nPDP. What he saw in the hands of his fake friends when we departed the sinking PDP can now help him to know who his true friends are.”

Eze advised Muazu, “Instead of wasting his time trying to rebuild the ill-fated PDP, to concentrate on the formal burial of the party as nine more Governors and more lawmakers of PDP extraction are billed to join other progressive and patriotic Nigerians in APC in order to salvage our dwindling democracy that has nosedived to despotism under this administration before the end of March 2014. If he doubts this he can take a clue from what is currently going on in the National Assembly where the PDP is now playing the second fiddle.”

Eze said “it is a shame that PDP that prides itself as the largest political party in Africa is afraid of allowing the majority party (APC) to take its rightful place in the leadership of the National Assembly.” He described PDP’s recourse to the court on the issue as “an exercise in futility and postponement of the evil day.”

As for President Jonathan, the defunct nPDP spokesman advised him “to try and become a statesman and concentrate on governance and provision of elusive dividends of democracy to Nigerians and forget about whipping back to life a dead horse (PDP).”

He further said: “Mr. President should please tell us where our $49.8bn alleged to be missing or unaccounted for by the NNPC is, as the Nigeria Governors’ Forum maintains that it was not paid into the Federation Account. Treating the disappearance of such a whopping sum not minding the cries of Nigerians including the Nigeria Governors’ Forum and the CBN Governor with a kid glove is condemnable and not acceptable. This is our money and we are entitled to know not only how it was used but where it is.”

On the Rivers State political crisis, Chief Eze told President Jonathan: “The ongoing orchestrated impunity in Rivers State, where the Police Command is being used to harass the Governor and the good people of the State can never be a wise political strategy. Listen to the good people of Nigeria and do the necessary before it will be too bad late.”