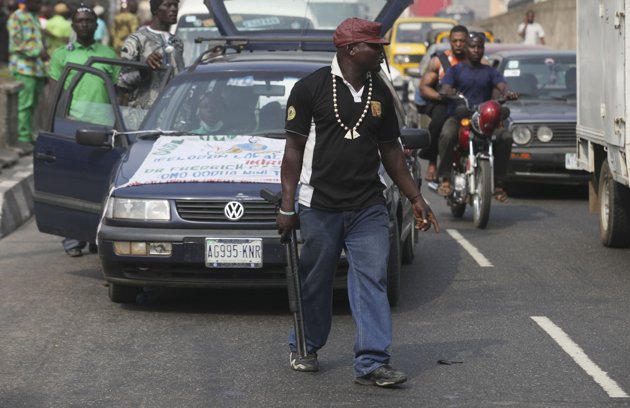 Nigerians who have been waiting and anxiously yearning for a change as per who becomes their next president come May 29 may after all be disappointed if the news at our disposal is anything to go by. The News Alert can authoritatively revealed that the Presidency through some people are working seriously to truncate the voting process once they discover that the poll results is not going the way of President Jonathan.

To achieve this, the presidency is working with some socio-cultural organisations like the OPC to disrupt the voting process particularly in the South West once the voting pattern is not in favour of Mr. Jonathan.

To this end, a leader of the organisation, one Otunba Gani Adams have been detailed to recruit enough thugs to do the dirty job, scare the voters by creating violence.

It is recalled that NewsRescue on the 20th of February broke the news of Jonathan’s plan to go ahead with the elections but that he has put mechanisms in place to disrupt the process through MEND in the Niger Delta and Boko Haram’s Shekau, as the group leader has promised to, in the North. That report is here: NewsRescue-REVEALED: Jonathan’s Latest Plan- To Violently Disrupt March 28th Elections on D-Day

A source at the Villa revealed to us that Otunba Gani Adams was sighted at the Villa last week Friday in company of some aides of Mr. President. Gov Fayose of Ekiti and Gov Mimiko of Ondo were also at the Villa that day to perfect the deals. Gani was quoted through a reliable source that he demanded for a huge some of money from the presidency to procure necessary weapons and allowances for his boys.

The huge sum running to millions of naira was however approved. Another source privy to the meeting said the leader of the OPC have been asked to mandate his thugs to monitor all the polling units across the towns and villages of the SW, and where Jonathan seems not to be winning, the OPC thugs should create violence and disrupt the voting process.

That plan is expected to be carried out strategically at once across the south west states. This will lead to invalidating the results of those areas and where it becomes a general phenomenal, the INEC may be forced to cancel the election. Once this happens, the source said the presidency will automatically call for the cancellation of the election as it will be adjudged as not credible, fair and transparent.

The cry and outpour from this crisis may either lead to the institution of an interim government or a military take over. This is another plan by the presidency at making sure GMB is denied the presidency of this country. I can assure you that the presidency is fully prepared to truncate this election once it did not go the way of Jonathan. “This is a signal to the opposition and Nigerians, let us cry out now and warn the so called OPC leader and those who are promoting Gani Adams and others like him, not to send us into another war because of their selfish interest,” the source warned.