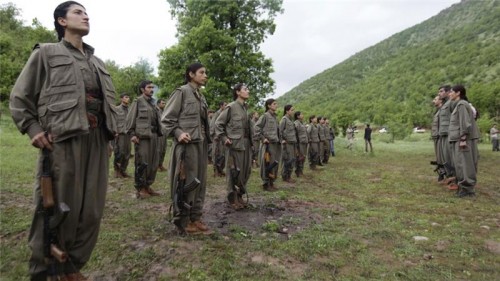 The Kurds are a very precious and important people in the Middle East, known for their centuries- old struggle for recognition in the countries they live in. They were persecuted in post-revolutionary Iran, oppressed under Saddam’s rule in Iraq and weren’t even granted citizenship in Syria. Kurds also went through difficult times in Turkey, and had to suffer the oppression of the terrorist PKK, the Kurdistan Workers’ Party, in addition to the horrible assimilation by the deep state of Turkey. While the operatives of the deep state tormented even the patriotic Kurds, it was the PKK communist terrorist organization, which has been carrying out terrorist attacks in Turkey for the past 40 years, at whose hands the Kurds suffered the most.

This great people, who had lived through very difficult times over the years, finally caught a break under the lead of the statesmen Masoud Barzani in Iraq, while Turkey finally rid itself of its deep state. However, the terrorist PKK changed tactics; it stopped its attacks on the mountains as a part of the “peace process” in Turkey but continued its operations in cities with the new name of “KCK,” or Group of Communities in Kurdistan. It went on to act almost like a new, illegal state, with its own constitution, judiciary and security system; this threat in Turkey can be discussed in another article. At this point, it would be expedient to look at the situation of the Syrian Kurds, as the state system that the terrorist organization has been trying to build in Turkey has already been established in Syria.

After the intense military campaigns by the Turkish army in the 1990s, the PKK militants had to flee to Syria with their leaders. As a result, Syria, yielding to Turkish pressure, deported Abdullah Ocalan, the leader of the PKK, who is responsible for the deaths of 40,000 Turkish soldiers and the execution of 18,000 of his own followers. The organization was handed over to Syrian intelligence, and some of the terrorists went to the Qandil Mountains in Northern Iraq, the center of the PKK, while the ones left in Syria were organized by the Ba’athists. What was named the Democratic Union Party (PYD) in 2003 is, in truth, nothing but the very same PKK founded by Ocalan. The PYD has made it clear that it accepts Ocalan as its leader and that it reports to Kongra-Gel, in other words to the PKK (Kongra-Gel is the new name of the PKK after the PKK was designated a terrorist organization by the EU and US).

One co-leader of the PYD is Salih Muslim, who is pictured dining with Ocalan, and who gives his speeches under Ocalan posters. The other is Asya Abdullah, a female militant that lives in the PKK base in Qandil.

The orders come from PKK leaders in Qandil; the armed wing of the PYD is the YPG, or People’s Protection Groups.

Unlike the Iraqi Kurds, Syrian Kurds are severely oppressed under the rule of a Leninist terrorist organization which seeks to build a proletariat dictatorship.

The Crisis Group, a respectable think tank, showed in its report that the PYD cruelly persecuted ordinary religious Kurds that didn’t share the PYD’s ideology.

In the 108-page report of Human Rights Watch in 2014, the PYD was held responsible for arbitrary arrests, violation of legal rights, unsolved murders and abductions. The report explained that people were detained without arrest warrants, prevented from seeing their attorneys, tortured and not taken to courts.

Almost every dissident was silenced and there were far too many suspicious deaths in detention. The report declared the PYD a direct affiliate of the terrorist PKK group active in Turkey and warned about its alarming behavior.

Western journalists also have made some interesting observations: Jamie Dettmer of the Daily Beast described the PYD, the Syrian arm of the PKK, as despotic: “Kobani Kurds are careful with [their] public criticism of the PYD, fearing retaliation. None who are critical agree to their family names being published.

The party [PYD] can make life very difficult for dissenters.

“Most of the fighters in Kobani are not Syrian Kurds; they are actually members of the PKK, which is designated as terrorist organization by EU and the USA: The commanders calling the shots now in Kobani are not the local municipal leaders trotted out for Western media interviews to highlight the role of women fighters during the siege. They are instead what locals call Qandil Kurds, a reference to the PKK’s mountain-range sanctuary in northern Iraq that extends 30 kilometers into Turkey and contains the separatist movement’s military training camps.”

The same thing has happened in the region of Tal Abyad in the past few weeks. The situation leading to Turkey allowing 15,000 refugees to enter in a single day was an attack on the region being carried out by the YPG. Jomah Ahmed, one of the Turkmens in the region, states that the YPG came to their homes and confiscated their belongings, burned personal documents and said that the area now belonged to them.

He adds, “They forced us from our village and said, ‘This place is now Rojova’.”

At this point, it would be good to remember the words of Syrian Kurdish Islamic Front’s leader Abu Abdullah: “We managed to run from Assad’s prisons, but got caught in PYD prisons this time. Both are the same to us.” Indeed, the first Kurdish people who sought refuge in Turkey in 2011 were running from oppression not by Assad, but from the PYD.

We should also remember the support of the PYD for Assad’s regime. One of the files in the ongoing KCK trial in Turkey shows that Ocalan sent a letter to Syrian President Bashar Assad through his attorneys in April 2011, in which he promised support to the regime in exchange for administrative authorities over the PYD in the north of the country. This makes it clear that while the PYD displays a friendly face to the US, it is actually working for Assad.

Let us point out to one fact: We have no objections whatsoever to the establishment of a Kurdish state in Syria or in Iraq. In fact, we insist that Barzani be protected, better supported by Turkey and that his state be made stronger. Barzani’s – and our Kurdish brothers’ – support for Israel is something we greatly champion and wish to see throughout the entire Middle East; Turkey should follow the same route and strengthen its ties with Israel.

However, supporting the PYD/YPG in Syria is an entirely different subject. The PKK has been working to build a North Korean-style government in the region for the past 40 years, and is now trying to achieve that goal by taking advantage of the civil war in Syria, operating under the name of “PYD,” which hasn’t been designated a terrorist organization by the US and the EU. The PYD shows pro-American sympathies “for now,” when in fact it is known for its hatred toward the US, Israel and other countries that it refers to as “imperialists” (The PKK’s declaration mandates that these imperialist countries be destroyed) and at the same time enjoys support from the world’s remaining communist countries, groups and parties; this is also the reason why it is being supported by the Ba’ath Party.

A communist Kurdish state, under the ostensible authority of the PKK and formed with the support of the US, will find a gateway to the entire Middle East, the Caucasus and to Europe, especially through Turkey, and will be a nightmare to the entire world, starting with the Kurds.

At this point, it is important to make a clear distinction; the Kurds are our family, our honor, our dignity, our friends and the embodiment of our greatest values. On the other hand, the PKK/YPG/PYD is a brutal terrorist organization that seeks to use Kurdish nationalism for its own purposes and wishes to build a communist state base on Leninist violence. It is critical to comprehend and make this distinction while assessing the ongoing situation in Syria.