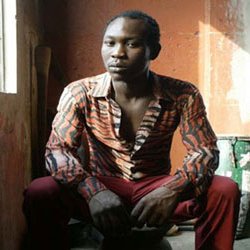 Afrobeat singer, Seun Kuti, son of Afrobeat legend, Fela Kuti, is  demonstrating more and more that he is a true son of his father, by not letting the government off the hook so easily when they execute unpopular programmes or make unfriendly policies.

The singer, in an Instagram post has called on Nigerians to say no to imported petrol and hike in petrol pump price. He reasoned that since NNPC gets its own fuel locally there shouldn’t be any increase in their own pump price.

“NNPC gets its dollars directly from crude sales, so it doesn’t have to source from secondary sources. NNPC refines it’s petrol locally, so why are they increasing their pump price if this is just deregulation and subsidy removal? This is a price hike or NNPC has been getting subsidy also? #saynotoimportedpetrol. How much will NNPC sell petroleum since they source locally? It has to be at the old prices, right? Dear Nigerians, this is our chance to fight back without the NLC or any trade union. It’s simple. #saynotoimportedpetrol. Let’s all buy from NNPC stations only. We have already been queuing for months” he wrote.

He further reasoned that anyone who wants to sell fuel in Nigeria should refine it in Nigeria, while challenging the marketers to build their own refineries and shun importation of the product entirely.

“Anyone that wants to sell fuel in Nigeria should refine it in Nigeria. This will boost the economy and provide plenty of jobs and also plenty of petrol. #saynotoimportedpetrol. Let’s shut them down. They always say we can’t sacrifice and organize as a people. Let’s start here it’s simple, we just have to #saynotoimportedpetrol. If Buhari was truly fearless, his directive should have been that all marketers must build refinery before they can sell. That way the hardship will be on a few not the many!! Like we don’t know they want to use our sweat to recoup election expenses incurred by their government chicken boys. These people have made billions based on licenses issued in the name of the Nigerian people , it’s time to force them to put some back in the Nigerian people not David Cameron’s backyard. That’s fantastically corrupt” he added.