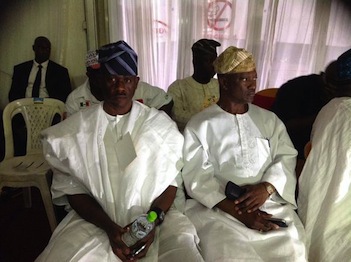 Lagos state Peoples Democratic Party (PDP) governorship aspirant and immediate past Minister of State for Defence, Senator Musiliu Obanikoro has petitioned the party over the result of the just concluded primary election in the state’s chapter of the party where Dr. Jimi Agbaje was declared winner, Vanguard reports.

The two-page petition letter which was  addressed to the Chairman, Gubernatorial Electoral Appeal Panel, revealed that accreditation of delegates for the election started at about 6:45pm contrary to section 19 sub section (d) of the PDP Election Guidelines which provided that accreditation shall be between 8am and 12noon. He opined that many delegates left the venue frustrated and as a result, they were disenfranchised.

He also informed the committee that the number of votes cast was more than the accredited delegates.

The petition reads in part, “That at the conclusion of accreditation, the total number of delegates who were eligible to vote was 806 (eight hundred and six). And this figure was announced loudly to the hearing of all that were present in the hall, thereby complying with Section 19 Subsection (e) of the PDP Electoral Guidelines. That at the conclusion of voting the total number of votes cast was 863 (eight hundred and sixty three) which established over voting.”

He pointed out that it is contrary to Section 19 Subsection (m) of the PDP Electoral Guidelines which stipulates that “no delegate shall vote for more than one aspirant and were the votes exceed the number of accredited delegates to such an extent as to materially affect the result of the election, the election shall be declared void by the State Electoral Panel and another Vote shall be conducted by the State Electoral Panel.”

Obanikoro therefore urged the committee to cancel the election because the process violated the constitution of the party.Obanikoro had earlier described the primary election as a “complete sham” in a press he organised conference after the election.

The Lagos State chapter of the All Progressives Congress says it will not congratulate the governorship candidate of the Peoples Democratic Party, Mr. Jimi Agbaje, because the events that led to his victory were allegedly dubious.

The publicity secretary of the party, Mr. Joe Igbokwe, said the PDP was a party of hypocrites because they were doing the same thing they had accused the APC of doing in the past.

Igbokwe described the PDP as a party of hypocrites because they criticise the APC of being undemocratic and yet it was found in their own camp. The APC wondered how the number of votes could exceed the number of delegates that voted at the primary on Monday.

According to Igbokwe, even though the PDP could not conduct a primary which had less than 1000 delegates, the APC was able to conduct its own successfully despite having over 5,000 delegates in attendance.

“You see how clear it was with our candidate, Mr. Akinwunmi Ambode. The body language of the PDP leaders had shown that they were supporting Agbaje and they went ahead to perpetrate fraud just as Obanikoro had predicted.”

When asked if the APC would be willing to receive Obanikoro if he defected from the PDP, the party said, “Obanikoro knows the best step that will favour him. If he feels his 10 years away from our party is regretful, he is free to return, we cannot reject him.”