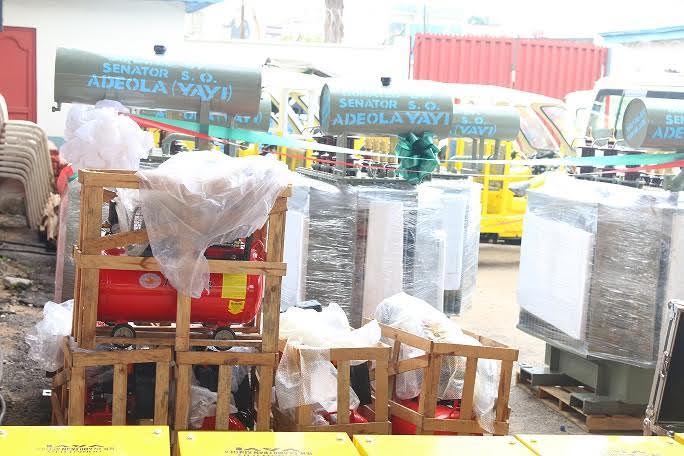 Senator Solomon Adeola representing the largest senatorial district in Nigeria in terms of population, Lagos West, over the weekend dazzled his constituents with massive empowerment to justify his representative function at the Red Chambers of the National Assembly at a town Hall meeting in Ikeja, Lagos State.

Other items distributed among the 10 Local Government Area that constitutes this humongous district are 28 boreholes, 56 tertiary institution scholarships at the rate of N50,000 for 4 years, 100 Deep freezers, 500 Lifejackets, 120 Hair Dryers,250 Hand Hair Dryers and 10 Tricyles among other sundry items like motor cycles helmet, 2KVA Generator and barbing clippers.

Speaking the event Senator Adeola said the town hall meeting and empowerment is in fulfilment of his campaign promises to his constituents as well as a brief on what is going on at the national legislature where they had sent him to as their representative.

“I am fully representing you at the Red Chamber of the National Assembly in spite of the leadership challenges that slowed down our legislative work. I have successfully get justice for one of us, Sgt. Amos Olaniyan, who was verbally suspended from The Nigerian Police Force 21 years ago for an offence he did not commit. Today he has been reinstated and is processing his salary payment for 19 years following my petition and senate resolution” Adeola stated.

The governor of Lagos State, Mr. Akinwunmi Ambode who was represented by the Commissioner for Information, Mr. Steve Ayorinde said that Senator Adeola is truly representing the people of Lagos State as he is at the fore front of pursuing the interest of the state and therefore complimenting the programmes of the state government.

The chairman of APC in the state Mr. Oladele Ajomale in his address state that as a legislator , Senator Adeola has not disappointed the people starting from his days as a stale legislator for 8 years and again as a legislator at the House of Representatives adding that what he is doing today is unprecedented in the annals  of  representation in Lagos State.

Among those present were several commissioners in Lagos State Government, member of the National and State Assemblies, traditional rulers and leaders of professional groups.