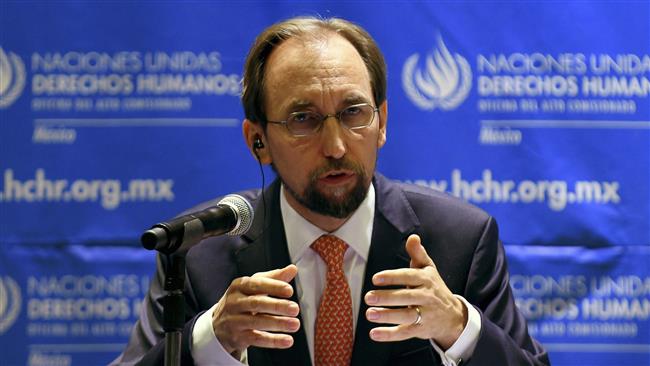 The United Nations High Commissioner for Human Rights has deplored the Saudi Arabia’s execution of prominent Shia cleric Sheikh Nimr al-Nimr as a “disturbing development”, since he had not committed a crime regarded “as most serious” under international law.

“The category of ‘most serious crimes,’ for which the death penalty is still permissible, has been consistently interpreted by human rights mechanisms as being restricted to murder and other forms of intentional killing,” said Zeid Ra’ad al-Hussein in a statement on Sunday, adding that the death penalty could only be handed down with stringent respect of due process and fair trial guarantees, and full transparency throughout the process.

He also rejected those convictions, which are based on confessions secured under torture and ill-treatment, or trial proceedings that fail to meet international standards.

“The application of the death penalty in these circumstances is unconscionable,” he noted, questioning the legality of the executions.

He also called on Riyadh to put a moratorium on all executions, noting that the Arab kingdom executed almost one-third of the last year’s total executions in a single day.

Sheikh Nimr, a critic of Riyadh, was arrested in 2012 in the Qatif region of Shia-dominated Eastern Province, which was the scene of peaceful anti-government demonstrations at the time.

He was charged with instigating unrest and undermining the kingdom’s security, making anti-government speeches and defending political prisoners and a Saudi court sentenced him to death in 2014. He had rejected all the charges as baseless.

On Saturday, the Saudi Interior Ministry announced that Sheikh Nimr had been put to death along with 46 others convicted of being involved in “terrorism.”

Execution of the Shia cleric has drawn condemnation from governments and human rights groups all across the world. Press