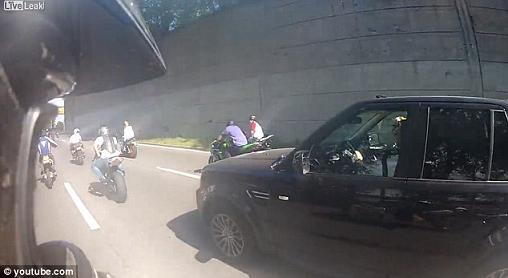 Video has emerged showing the shocking moment a Range Rover driver apparently drove through a crowd of motorbikes as it fled with its family inside for fear of being attacked.

Police have revealed the bikers started to damage the vehicle after the driver, 33-year-old Alexian Lien, hit a motorcyclist.

Fearing for the safety of his wife Roslyn Ng and young child, aged five months, the SUV driver then sped off, hitting several bikers in its path.

The six-minute film shows the SUV hit another motorcyclist after it was chased by the pack of bikers.

The family are eventually brought to a standstill in Manhattan traffic and immediately bikers run to attack the vehicle, smashing the driver’s window and attempting to smash the rear door window.

The five-month-old child was in the back and Ng was in the front passenger seat.

An NYPD spokesman told MailOnline the Lien was taken to hospital and treated for lacerations to his face and body.

He said there were no other injuries reported from the incident.

No one has been arrested and police are still investigating and examining the evidence, he said. The moment Alexian Lien fled from a pack of motorcyclist, dramatically taking out several in its path The bikers had been riding alongside the Range Rover before the incident. Shortly after this moment, the biker in blue jeans directly front of the car braked, it appeared the vehicle may have hit it Swarm: The massive group then ground to a halt and surrounded the vehicle

The spokesman said, according to Lien, a large number of motorcyclists were driving ‘erratically’ and he ‘accidentally collided with one’.

The footage shows one motorcyclist brake hard in front the the car and seems to get bumped by it.

He pulled over but some of the bikers started to damage the vehicle. The NYPD spokesman told  MailOnline the driver drove off ‘to avoid an impending assault’.

The video shows the Range Rover accelerate suddenly knocking over bikes and motorcyclists, driving over the top of them.

The footage was captured on a helmet camera of a motorcyclist during an annual bikers’ event in New York City, at around 2pm yesterday. Apparently intimidated, the driver then accelerates away knocking down bikers in its path The chase is on: It only takes a few seconds before the front running bikers, including the one filming, catch up with the Range Rover Caught: Within minutes, the whole pack has caught up with the vehicle, with Lien, Ng, and their 5-month-old inside

Lien speeds away, but immediately the angry bikers follow and it takes a matter of seconds for them to catch up.

The footage shows them following the vehicle for several minutes, at times getting close and intimidating the driver.

The group of bikers take Exit 14, on route 95, following signs for the Cross Bronx Expressway and passing the sign for Henry Hudson Parkway, before they traffic begins to slow.

The bikers again surround the vehicle, blocking its path and it’s forced to stop.

Seizing an opportunity to confront the driver, one biker dismounts and tries to open the door, but the SUV speeds off again, knocking down at least one more motorcyclist. Halted: The bikers surround the vehicle forcing it to stop, and another biker seized the opportunity to try to get into the driver’s side door The driver speeds off again, knocking down another motorcyclist

The driver heads off on route 95 heading north towards the Cross Bronx Expressway, then taking the W 176 SI which leads into a built-up area with heavy traffic.

Forced to stop at traffic lights, the Range Rover comes to a standstill, and within seconds two bikers are off their vehicles and attacking the driver’s side windows.

The first takes off his helmet and throws it against the driver’s door window, smashing it; the second tries to punch through the rear door window, where the child was sat.

The footage then stops.

The video was posted by a biker, under the name GIXXARDR on Liveleaks, from Melbourne, Australia, this morning. He claims one biker was killed, which the police said was not true. Smashed: When they come to a standstill in heavy traffic, it takes moments before a biker jumps off and attacks the vehicle, smashing the driver’s window with his helmet

A second driver also tries to smash the back window, then the footage abruptly ends

Already it has received numerous comments, most are in support of Lien.

One person, whose profile name is Sgt Pepper, says:  ‘I would do exactly the same thing. They’re intimidating him and he’s probably fearing for his life.’

Another, known as ‘zacarra’ says the driver acted in ‘self defense’.

‘Did you see the biker break (sic) check him in the beginning. This poor guy was running for his life from the start,’ zacarra writes.

According to ‘meathead12’ it was ‘justifiable’: ‘Only a fool would stick around to be pulled out of his car and lynched by 100 bikers.’