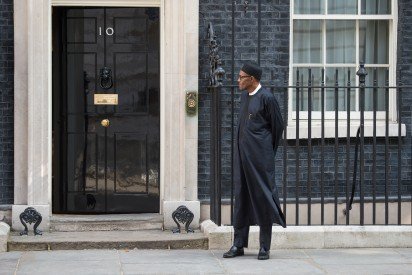 President Muhammadu Buhari should read this before jumping on his presidential jet for the journey to London. He may shelve the trip and if he goes, he may not shake hands with Prime Minister, David Cameron.

His host,  Cameron has  demonstrated no iota of regard for him and his country Nigeria, dubbing it a ‘fantastically corrupt country’.

Cameron was caught on camera giving this description of Nigeria and Afghanistan when he met  Queen Elizabeth on Tuesday.

He came to inform the Queen about heads of state coming to attend his  anti-corruption summit, scheduled to hold in Lancaster House on Thursday.

The summit aimed at stepping up global action to combat corruption in all walks of life, without Britain itself shutting down  British Virgin Islands, Cayman Islands,  nests for  corrupt and criminal gangs,  where they  stash stolen money,  using shell companies to cover their trails.

In a pooled video feed made available to the ITN broadcaster, Cameron was shown talking with the queen about the summit.

“We had a very successful cabinet meeting this morning, talking about our anti-corruption summit,” Cameron said when the queen approached.

“We have got the Nigerians – actually we have got some leaders of some fantastically corrupt countries coming to Britain.”

Cameron went on: “Nigeria and Afghanistan – possibly two of the most corrupt countries in the world.”

But the Archbishop of Canterbury Justin Welby defended Nigeria’s leader, Muhammadu Buhari: “But this particular president is actually not corrupt.”

Cameron appeared  to be fixated with the old idea of a corrupt Nigeria in his brain as the two leaders he was ridiculing,  Afghan President Ashraf Ghani, and Buhari , acknowledge corruption in their countries and have pledged to clean it up.

Only North Korea and Somalia, jointly ranked at number 167, are perceived to be more corrupt. Nigeria is at number 136 in the index.

It was not clear whether Cameron realised he was being filmed and recorded at the event at Buckingham Palace.

A bystander then joked to laughter: “They are coming at their own expense one assumes?”

When asked about the comments, Downing Street did not immediately respond.

N40 Billion is not missing in NDDC