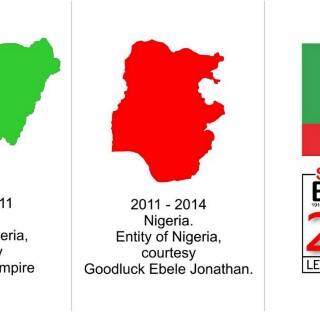 The Boko Haram on Monday expanded the territory it controls in Adamawa when it captured the town of Maiha, residents have told PREMIUM TIMES.

Maiha is about 25 kilometres from Mubi, the commercial town captured by the insurgents in Adamawa last week. Maiha is also about 200km from Yola, the state capital.

Even before the town fell to the insurgents, it was already a shadow of itself as commercial and social activities were paralyzed. People were already leaving the town due to its proximity to Mubi.

Fleeing residents said they saw many soldiers running away from the area with some of them hitch-hiking in residents’ vehicles. The soldiers told the residents that if the insurgents caught up with them, it would lead to instant death.

“The insurgents started trooping into the town around 2:30 p.m. and engaged troops stationed at Kosha before advancing to the main town of Maiha,” a fleeing resident, Kabir Musa, said in a telephone interview. “The soldiers, who advanced to the area in their bid to recapture Mubi, started running away as the insurgents overran the entire town.”

Another resident of the town, Garba Baba, said some fleeing soldiers begged him to assist them with civilian clothes so they would not be traced by the insurgents. The soldiers, he said, even threw their guns into the bush.

“The fleeing soldiers asked us to give them our clothes so that they can camouflage and escape from the area safely as some of them discarded their weapons in the bush. A lot of the discarded weapons are currently lying in the bush,” Mr. Baba, who also fled Maiha, said.

He said in a similar situation to when the insurgents captured Mubi, they did not encounter any challenge from the Nigerian troops.

“The insurgents did not encounter any challenge as they stormed the town in APC’s and Toyota Hilux vans firing shots into the soldiers’ directions chanting Allahu Akbar,” Mr. Baba said. “The Boko Haram insurgents had ordered us not to run, saying that they are not after civilians but soldiers and other security people.’’

Another resident still trapped in Maiha, Dauda Mallam, said, “Many of the residents fled into the bush, particularly soldiers. Some of them may have been killed by bullets.

“The insurgents also hoisted their flags in strategic places in the
town.”

A soldier of the 23rd Armoured Brigade, Yola, also told PREMIUM TIMES that “we just heard that the
insurgents had attacked our men in their base near Maiha town, and some soldiers were killed in a gun battle. We are yet to get full details.”

The military is yet to officially react to the Maiha takeover in Adamawa, which like Borno and Yobe, has been under a state of emergency since last year. The emergency rule has not deterred insurgents from carrying out terrorist activities leading to the death of thousands of people.

Several soldiers including senior officers are currently being investigated and disciplined for fleeing battles with insurgents.

On Monday, the Nigerian government, apparently frustrated by its inability to check the Boko Haram insurgency, accused the U.S. of not doing enough to assist the country.

Nigeria’s Ambassador to the United States, Ade Adefuye, expressed the government’s view when he received a delegation of the U.S. Council on Foreign Relations.

“I am sad to inform you that the Nigerian leadership: military and political, and even the general populace, are not satisfied with the scope, nature and content of the United States’ support for us in our struggle against terrorists,” Mr. Adefuye said.

“We find it difficult to understand how and why in spite of the U.S. presence in Nigeria with their sophisticated military technology, Boko Haram should be expanding and becoming more deadly.