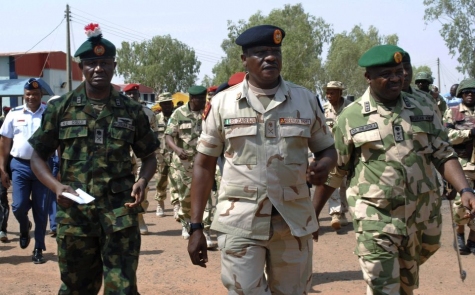 There was tension at the Gokana local government area of Rivers state, as a group of armed soldiers have raided the residents of a former militant leader, Chief Solomon Ndigbara (also known as Osama bin Laden).

The soldiers stormed one of Ndigbara’s houses in Bua-Yeghe, from their base, 2 Brigade of the Nigerian army, at about 5.30pm on Sunday, January 10.

According to the Punch, it is alleged that the ex-militant still has his hands in gun running and kidnapping.

It was learnt that the soldiers who came with about ten Military trucks destroyed two vehicles; a Toyota Sienna and Lexus SUV.

Sources said some rooms in Ndigbara’s Bua-Nyeghe home were ransacked while some property inside the rooms were damaged.

Tambari accused leaders of the All Progressives Congress (APC) in Ogoni of being behind the military invasion of Gokana.

He said: “We received the shocking news yesterday (Sunday) that the military had besieged this premises. You can see the extent of the damage here. They were here shooting sporadically, damaging property and everything.”

“I don’t know which court, where Solomon Ndigbara has been tried and found to be guilty of whichever offence for him to deserve this kind of onslaught. I want to put it clear that this onslaught is on the entire youths of Ogoni,” Tambari added.

In his reaction, the Chairman of Gokana local government area, Austin Sor, described the operation as an onslaught, shocking and unwarranted.

Sor said, “It is pathetic and a war declared on Chief Solomon Ndigbara and the people of Bua-Yeghe. To me, this is a political war.

“Yesterday at about 4pm, I was in the community field watching a final match when some of my community boys came to call me and asked if I am aware that Army has taken over the community.”

“When I got there, actually, what I saw were heavily armed soldiers with 10 vans in the compound of Solomon Ndigbara. An attempt to get their attention to know who sent them was seriously resisted. Even the paramount could not access them,” Sor narrated.

Confirming the raid through a statement on Monday, army spokesman in Port Harcourt, Captain Eli Lazarus, said the raid was carried out based “on credible intelligence”.

Capt Lazarus further informed that supporters of Ndigbara staged a protest against the raid.

The 2 Brigade spokesman enjoined all law abiding citizens in the area to go about their lawful activities, as the military will continue to work assiduously to ensure the protection of lives and property of all.

A youth leader in the community, Mr Letom Kukang, alleged that the action of the Military men were never on a raid but a political witch-hunt of a community peace maker, and a well known supporter of the Peoples Democratic Party (APC) in Rivers state.

Letom affirmed that the home of Ndigbara was ransacked , scattered and two of his wives were whisked away alongside his younger brother. However, as at time of this report the two wives of the ex-militant had been released while the two brothers of the ex-militant are still being held.

In reaction to allegations against the party, the APC cautioned that the party should not be linked with security operations, adding that issues on security should be taken to security agencies.

The APC said that its attention has been drawn to reports in the media by some persons especially of the PDP attributing raids by security agencies on a location in Yeghe, Gokana LGA and other security dark spots in the state to the ruling party.

“This trend of narrative being dishonestly foisted on the people through the media by elements of the PDP is most uncharitable, manifestly dishonest and flies in the face of logical reasoning” the APC said in a statement signed by its spokesman, Mr Chris Finebone.

The APC noted that “It is important to remind everyone that the APC, as a political party, has no mandate to embark on security duties either on its own or in conjunction with security agencies under any circumstances whatsoever. The APC restricts itself to its function of seeking political power through legitimate political process.”

The Rivers state APC urged all and sundry, especially members of the PDP to resist the lure of resorting to the convenient option of seeking who to blame for its misfortunes.

“We expect the PDP to accept the fact that its rank is populated by known criminals and people with notorious history of criminality especially those appointed as Local Government Caretaker Chairmen and it would not be surprising if security reports point to them every now and then. The PDP is very much aware of this and that is why Governor Nyesom Wike has never presented any of his nominees to security agencies for security screening,” the APC added.

The APC further advised PDP in Rivers state to look inwards and blame itself for the present kidnapping, armed robbery, cultism, killings and general insecurity it has foisted on the people of the state.

The soldiers carried out the operation at the home of the ex-Niger Delta agitator in Port Harcourt on Monday, January 11. It remains unclear why Saboma’s residence was evaded.