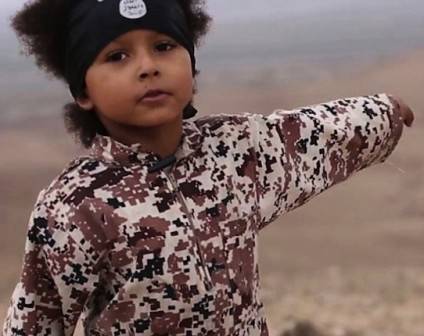 It has now been revealed that the child ISIS soldier who has threatened the UK with new atrocities in a chilling video is the son of a lady muslim convert from London, born by Nigerian parents.

The lady, Grace Khadijah Dare grew up in Lewisham, South London. She was born to Christian parents, Henry and Victoria Dare, but later converted to Islam and married a Swedish ISIS fighter, Abu Bakr.

Together, the couple have had two children, the oldest being the six year old boy, dressed in military fatigues and a black bandanna bearing the white mark of ISIS and chillingly declaring that ‘We will kill kuffar [non believers]’.

Grace’s father Henry Dare, a cab driver, has confirmed that his grandson is ‘definitely’ the boy in the sick ISIS video, the Mail Online reported today.

‘I was surprised when I saw the picture. It’s definitely him. Of course I’m worried but there’s nothing I can do now. I’m not angry – I would never have expected it. I just hope someone is trying to bring them back”, he told The Telegraph.

According to the report, in 2014, Grace posted another shocking photograph of the boy, named Isa, on her Twitter account, holding an AK-47 rifle. The boy was then just four years old.

Isa also has at least one younger sibling, a boy who would now be between two and three years old, who his mother has referred to as a ‘mini mujahid’, or holy warrior.

Grace is believed to have been radicalized online before she started attending the Lewisham Islamic Centre, where Drummer Lee Rigby’s murderers are said to have worshipped, although the mosque denies they were part of the congregation.

Prime Minister David Cameron has described the video as ‘desperate stuff’ from a group that is ‘losing territory’ and ‘increasingly losing anybody’s sympathy’.

Two years ago, Grace ‘Khadijah’ Dare swapped her ‘comfortable life’ in Britain, where she was known for her dimples and her love of her mother’s home cooking, for the horror of Syria, where she joined the terror group ISIS.

Friends have previously described Dare, from Lewisham, South London, as a bit of a tomboy who enjoyed wearing tight jeans and platforms. She also had braces and dimples and ‘was very cute’.

Dare liked to watch football on TV as a child, and loved Chinese food and her mother’s home cooking.

When she was older she went to a local college to study media studies, film studies, psychology and sociology, and was a popular young girl.

But it was at the age of 18, that she converted to Islam and began worshipping at the Lewisham Islamic Centre – which has links to both the Woolwich killers of Lee Rigby and radical cleric Abu Hamza.

She admitted in a Channel 4 report in 2013 that when she began wearing the full face veil in Lewisham people on the street told her to ‘go back to her country’, to which she replied: ‘I was born round the corner’.
In the same footage she urges other Muslims to ‘stop being so selfish…focusing on your families or studies’ and implores them to join her in Syria and join the holy war.

Hours after the beheading of American journalist James Foley at the hands of a British jihadist, Dare gloated on social media at his execution and vowed that she would be the first British woman to kill a US soldier.

Dare was gleeful that the ‘UK must be shaking up’ after the execution and from her home in the Syrian scrub she tweeted: ‘Any links 4 da execution of da journalist plz. Allahu Akbar. UK must b shaking up haha. I wna b da 1st UK woman 2 kill a UK or US terrorist!’
-MailOnline