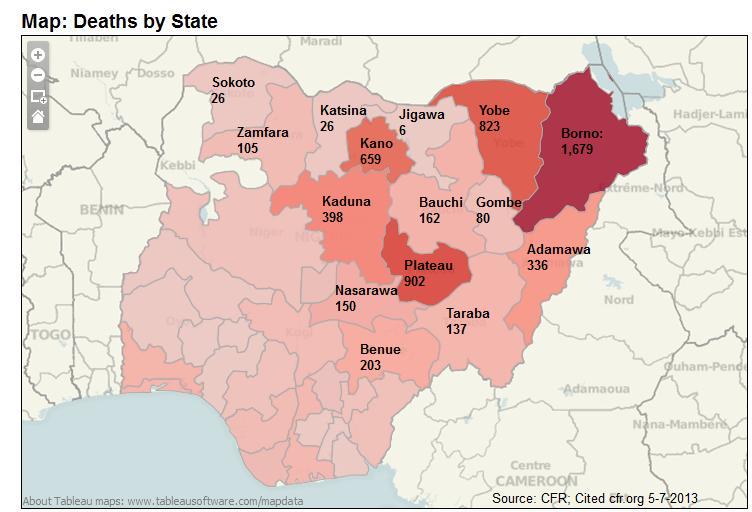 Terrorism and violent crimes have given Nigeria and Nigerians more bad labels in three years than corruption has done in the 51 years of nationhood. — Halima Abubakar Aliyu

The economic implications of the growing rate of violence and terrorism in Nigeria can be measured from different perspectives. The cost of distruction of property and national productivity are directly affected while there are longer term indirect cost of confronting and curbing the menace. Not to be forgotten is the human cost, the amount of lives wasted in the process.

The challenge of controlling violent crimes and terrorism has really been very expensive. Just this year, the federal government is spending a whale of amount on defence and security. A heavy sum compared to expenditures on other critical sectors of the society. The cost of tackling terrorism in Nigeria also plunges us deeper into the mire of poverty and political destabilization, cankerworms that are themselves, already eating up the nation’s vast capital and material resources. In the bid of proffering a workable means by which they can be terminated.

It is saddening to know that the recent state of insecurity in the country is happening at a time when most of the key industries in the country have become moribund. What is even more saddening is that struggle against terror is gradually affecting the transport and tourism industries which are key foreign exchange earners, tax revenue generators, business opportunities for growing entrepreneurs and sources of employment.

Domestically, the fight against terrorism has caused a clamp down on the popular “Okada” business in states like Borno and Yobe, leading to the ban of the business in some parts of the these states. Secondly, interstate travel for business and other activities has been grossly affected. Indigenes of southern states of the country are becoming more afraid to visit the north and vice versa.

Internationally, Nigerians are now being treated with great suspicion. It is my opinion that the recent repatriation of some Nigerians by the South African and British governments may not be unrelated to events happening in Nigeria. To crown it all, foreigners are finding it hard to visit Nigeria. A country once believed to be “Giant of Africa”, and one of the most colourful countries in the world. The reason is not farfetched, no “Oyibo” wants to be kidnapped, neither do they want to be caught one day in the middle of a crossfire between terrorist gangs and security operatives in the hotels or while sightseeing.

With the state of the nation now, one may not be considered to be totally wrong to say that terrorism and violent crimes have given Nigeria and Nigerians more bad labels in three years than corruption has done in the 51 years of nationhood.

While we may continue to count the implications of the terrorism and violent crimes on our society and our economy, it is also necessary for us to begin to plot a new vista for our nation. True, failure of the government to act in ways that boost public confidence on such issues have been demonstrating, coupled with that, our system seems to be providing these destroyers of our society with more reasons to perpetrate their dastardly acts – the high rate of corruption in high and low places, the increase in unemployment among a majority of the nation’s youth, mass illiteracy-cum-ignorance and the hypocrisy of some traditional, political and religious leaders.

However, it is time for something to be done, and we must believe that it will. It may only take some time. A popular catch word “it begins with you”, and I dare say it begins with us. First, we must be a nation of positive thinkers and forward lookers like the Americans who despite constant political, natural, economic and security challenges have managed to keep their heads above the water.

We must exhibit such reliance and determination by praying for our country. Secondly, religious leaders should learn to desist from teachings that encourage violent religious extremism and fundamentalism.

In addition, the government should stop talking in loud tones, telling us that some people are responsible for the funding of terrorist groups in the country, yet being unable to find anybody or organization culpable for such act.

Furthermore, security operatives should consider this, the time to unlearn the act of sacrificing their integrity on the altar of greed and learn the practice of selfless service to the people as enriched in the principle of patriotism. They should stop harassing innocent Nigerians whom they are supposed to be protecting on the road while the bad eggs continue to roam about cot-free.
Efficient and effective legal machinery should also be put in place to ensure that perpetrators of such violent acts against the sovereignty of our nation are decisively dealt with.

Lastly, governments at all levels must ensure that they engage in development oriented projects that would help alleviate the pains of the teeming mass Nigerians. It is only when we all work together and the government works for the people with social development in mind, that we may be able to achieve peace and the resuscitation of our badly terrorism-damaged economy.