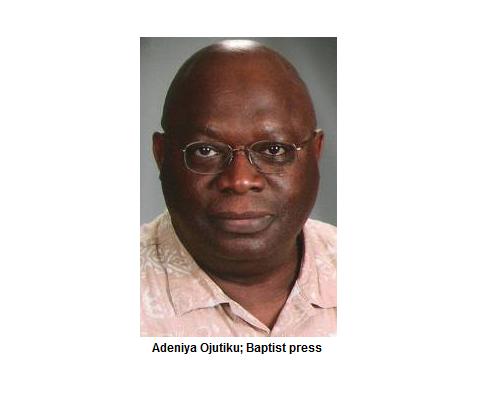 RALEIGH, N.C. (BP) — Islamic terrorism thrives in Nigeria because of a culture that trains, arms and pays impoverished youth to commit violence in political campaigns, creating a ready militia for terrorists to recruit when the election season ends, an expert in Nigerian relations said.

Nigerian politicians refuse to fight terrorism at its core because it would mean dismantling the political culture that secured their election, said Adeniya Ojutiku, a Southern Baptist working from Raleigh, N.C., to evangelize and serve Nigerians in his homeland.

Nigerian state governments should be held financially responsible for failing to control or halt Islamic terrorism against Christians, said Ojutiku, co-founder of the Lift up Now Foundation, a grassroots organization to meet political, economic and social challenges in Nigeria.

“The issue of monetary compensation for each victim of Islamist terrorism in Nigeria, their families, communities, as well as churches (burnt, bombed, destroyed or damaged), needs to be introduced into the public (discussion),” Ojutiku told Baptist Press. “Victim compensation must become a focal point of agitation by all well-meaning peoples.”

Persecution of Christians is as much about politics and economics as it is about religion, Ojutiku said, noting that Islamic extremists recruit young militia who have been abandoned at the end of the election season and see no other means of survival.

“It is a well-known fact that most violent ethnic groups across Nigeria started as the handiwork of some desperate politicians who solicited and armed criminally-minded violent thugs, so as to intimidate, crush their opponents and rig political elections during the democratization of Nigeria from military rule,” Ojutiku said.

“Many of the violent groups were well-funded and protected by their lords during political campaigns but were immediately ignominiously abandoned after elections had been won and lost. Soon, these groups of thugs evolved into militias, harassing, intimidating and extorting money from common citizens,” he said. “This criminality escalated as members of these private militias … sought local/international ‘deep pockets’ and began promoting new causes and agendas.

“Ever since the emergence of Boko Haram … other Islamist terror groups have emerged in Nigeria,” he said, including Ansaru and the al-Qaeda-linked Movement for Oneness/Unity and Jihad in West Africa (MOJAO) or (MUJAO), which has a strong presence in the Niger Republic north of Nigeria.

“Evolving evidence now suggests that Islamist terrorism in Nigeria is a convergence — a marriage of convenience — of various local and global agendas. For example, a handsome military-grade weapons cache was recently discovered in very well concealed underground bunkers in Kano city, while an air cargo shipment of military weapons from Iran was intercepted (following a tip-off) at the Kano international airport,” Ojutiku said. “The weapons belonging to some Nigeria-nationalized Lebanese were traceable to the radical Lebanese Islamic organization — Hezbollah.”

Because of this ingrained system, attacking Islamic extremism will require a concerted approach, Ojutiku said.

“To dismantle this global incendiary influence over Nigeria’s Islamist terrorist organizations, global and international secret-service operations need to further deepen their efforts and collaboration with Nigeria,” Ojutiku told Baptist Press. “Money trail, light weapons manufacture and global movement tracking, high-tech digital surveillance of critical communication must be intensified. Here, extreme caution must be exercised because critical information has been known to secretly pass on to the sponsors of these terror groups in Nigeria thereby undermining, if not completely jeopardizing, local terror containment efforts.”

Nigerian President Goodluck Jonathan, who declared a state of emergency in northeastern Nigeria in May, is not doing all within his power to combat the violence, Ojutiku said, and thus the national government also should be held financially liable for the destruction.

“Nigeria’s state [governments] unable to secure their territories from Islamist terrorist attacks must be assumed to be complicit in the matter and therefore made to become legally responsible for victim compensations, deducted from their statutory allocations from the federal government as a first-line charge,” Ojutiku told Baptist Press.

Lift Up Now has partnered with the Christian Association of Nigerian-Americans (CANAN) to raise funds for victims and their families who have suffered from Islamist terrorist attacks. CANAN, a multi-denominational body addressing issues affecting Nigerian Christians at home and abroad, was formed in September 2012 in New York. Ojutiku serves as a special adviser to the North Carolina chapter of CANAN, one of several local chapters in the U.S.

In Nigeria’s Plateau State, the Youth Wing of the Christian Association of Nigeria is working with Lift Up Now to create a sustainable grassroots network, mobilizing, training and equipping its members for meaningful interfaith dialogue, peaceful coexistence, civil defense and crisis management through workshops & seminars, Ojutiku said.

“Once successful, this model will hopefully be adopted across the crisis-ridden region,” he said.

Noting that organized Islamic terrorism also is supported by “Fulani herdsmen,” Ojutiku said they are unorganized but very active agents of Islamist terrorism across the entire country.

“[For Fulani herdsmen, their] main goal is resource domination of good fertile land for their nomadic cattle-rearing lifestyle, regardless of the land owners and their existing agricultural farming operations,” Ojutiku said. “These herdsmen rape, maim and kill young helpless girls, women and their men as they traverse Nigeria from the north to the coastal southern borders, encroaching on and devastating other tribes’ arable lands with their cattle.”

The herdsmen further give support to terrorism through “almajiri,” a system of taking young boys from their homes and forcing them to beg on the streets while indoctrinating them in Islam.

“This unorganized ‘system’ is one of massive slavery, servitude and jihadist indoctrination of underage boys as young as 5 years old, carted away in lorry loads from their families. The ‘almajiri’ system institutionalizes street begging by small children for money and food in order to support themselves and their Koranic teachers with whom they live and learn,” Ojutiku said. “There is nothing Islamic about the practice, which is not found in any other country including Saudi Arabia, India, Indonesia, Malaysia and other predominantly Islamic countries: It is purely a socially ‘approved’ system of child neglect, depravation and abuse.”

“They are openly averse to the idea of retrieving, rehabilitating and reintegrating the neglected almajiri children into [the] modern-day educational system,” Ojutiku said. “How these sectional leaders condemn myriads of helpless children to a life of perpetual generational poverty, dependency and criminality for their narrow political, feudalistic agenda!”

Dismantling almajiri also will require an international assault crossing political, social and cultural divides as well as efforts that involve ordinary citizens, advocacy groups and government officials for mobilizing educational and social service resources toward gainful employment for youth, Ojutiku said. Nigeria, he said, “has the financial means to enable every child to be properly educated within the first 12 years of age.”
–30–
Diana Chandler is Baptist Press‘ staff writer. Get Baptist Press headlines and breaking news on Twitter (@BaptistPress), Facebook (Facebook.com/BaptistPress) and in your email (baptistpress.com/SubscribeBP.asp).