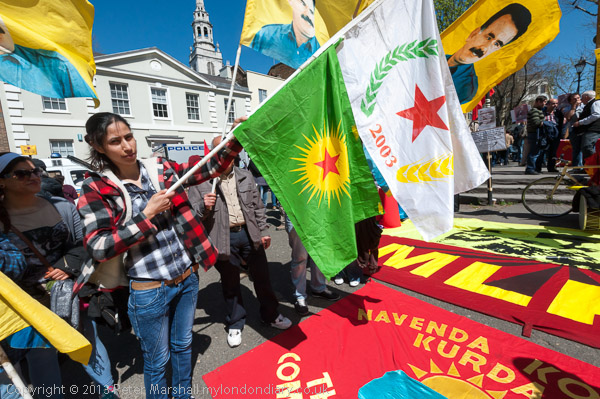 The PYD is the PKK in Syria, not a representative of the Syrian Kurds. Armed PYD militants also make up the YPG.

Banners belonging to the PKK/KCK, Abdullah Öcalan and the PYD fly together over the towers  constructed in the cemetery in Kobani.

The PYD has one leader, and that is Abdullah Öcalan. Believing in the Leadership of Öcalan is the most important condition for joining the party. The party seeks not the liberty and well-being of the Kurds in Syria, but to build the strategy of democratic confederalism, as set out in the KCK agreement and establish an independent communist Kurdistan. Another one of the aims in the party bylaw is to achieve the freedom of Abdullah Öcalan.

In the PYD bylaws;

According to section 2, titled ‘What is the organization?’, Abdullah Öcalan is the leader of the PYD, the KCK, the people of Kurdistan, Kongra-Gel and the Kurdish community in Rojava (northern Syria).

Paragraph 3 of section C, titled ‘Members of the Organization,’ says that “Party members must remain loyal to Abdullah Öcalan, must strive for his freedom and for the establishment of a democratic confederated system in Kurdistan.’

Many other examples could be cited.

When the Arab Spring made its way to Syria Assad, who was in conflict with the opposition in all regions of the country by 2011, began losing ground to the opposition, particularly in the north. Assad moved to reach an understanding with the PKK/KCK in order to reduce the influence of the Free Syrian Army in the north of the country and to prevent the Kurds in the northeast from joining his opposition. Under this agreement, Assad supported the PYD, the structure of the PKK/KCK terror organization in Syria. (A letter sent by Öcalan to Assad in 2012 through his lawyers on this subject appears in the records of Istanbul’s High Criminal Court No. 16.)

Since the lands inhabited by the Kurds in northern Syria are among the objectives of the PKK/KCK, this understanding with Assad was of vital importance to the group’s ability to organize in the region.

According to the PKK/KCK’s strategy, the primary goal is to achieve autonomy in the relevant parts of the four countries listed above. In order to achieve this so-called autonomy, the PKK/KCK uses the concept of ‘democratization.’ Those regions that achieve autonomy will, in the next stage, seek to move to a federal system in their relations with the respective central governments. The real aim is to combine these four components together once federations have been set up. The PKK/KCK is acting in a systematic manner, remaining faithful to this plan, in its actions and activities in these four countries.

The turmoil in the country assisted the PKK in its growth in Syria, but the ‘Solution Process’ adopted by Turkey also influenced that indirectly.

In the light of the KCK agreement, the primary goal here is to establish an autonomous administration within the borders of Syria. By conducting a systematic study of public opinion, the region was given the name of ‘Rojava,’ even though the name had never appeared anywhere before and as if it is a part of a so-called Kurdistan; this name then began being used for the region.

As a result of Assad’s understanding with the PKK/KCK against the FSA, the organization grew rapidly in the north of the country and increased the number of its militants. Administrative bodies were set up as the organization grew stronger in the region. Not only did Assad provide a region for the PYD, the Syrian branch of the PKK, he also provided financial backing and recalled Salih Muslim, for whom there was a arrest warrant. Moreover, Assad released all PYD militants who were serving their sentences in Syrian prisons.

Furthermore, under the agreement reached with the PKK/KCK, Assad also allowed the PYD to open camps by recruiting armed militants in Idlib, Kobani and Kamishli.

As of 2013, using the PYD, the PKK stepped up its efforts toward autonomy, centered around Kamishli, which consists of the three cantons of Afrin, Kobani and Jazeera in the north of Syria.

Assad permitted PKK militants to easily enter into Syria from Iraq. As a result, in the first half of 2012 some 800 terrorists, members of the PKK/KCK, entered Syria from Iraq, with all their weapons, and encountered no obstacles in doing so.

The PKK-PYD organization – which was growing increasingly powerful in Syria – armed young people aged 14-20 from the Kurdish population in Syria and forced them to take part in its activities. In addition, the PKK brought young people from Turkey it had either forced or bamboozled into going off to the mountains to Syria to join the ranks of the PYD, the great majority of whom died in the fighting against ISIL.

The PYD, which claims to be thinking of the future of the Kurdish people, has never fought or acted against Assad’s forces that have been persecuting our Kurdish brothers. On the contrary, it has deliberately prevented our Kurdish brothers from uniting against the Assad regime and has obstructed the strengthening of the opposition to Assad in those parts of the north of the country inhabited by the Kurds. As a result, the opposition has never been able to establish full control in the north of the country.

One of the reasons behind this collaboration of the PYD and the Syrian regime is that both of them have Marxist-Leninist aims; another reason is their hostility towards Turkey. Both the Syrian regime and the PYD regard Turkey as an existential threat for which reason they blatantly support both one another and the PKK within Turkey. For that reason, Turkey’s directing its entire attention toward the elimination of Assad while turning a blind eye to the existence and activities of the PYD in the region is endangering its own integral structure and unity.

What Turkey needs to do is to explain to Europe and the U.S. that the PYD is a terrorist movement that is a component of the PKK, not a liberation movement, and then to obstruct the flow of money and weaponry to it. So long as it fails to do that, Turkey’s connections to the Arab-Islamic world will be severed by the PKK in the south, and the risk of the country being broken up will increase still further.