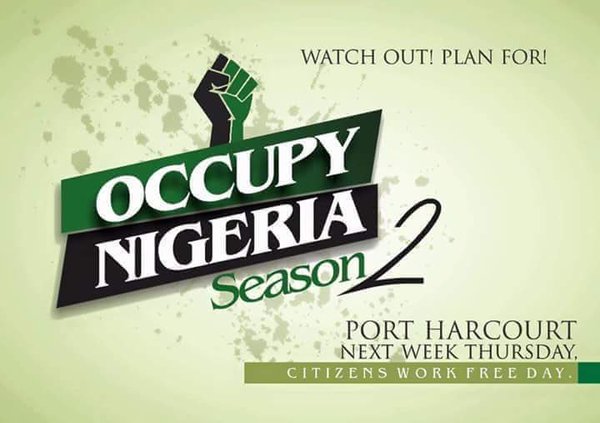 A group, Occupy Nigeria, which played a role in the shutdown of the country in 2012 when the federal government removed fuel subsidy, said it had begun mobilising Nigerians for a peaceful protest in Port Harcourt, Rivers State, on Thursday, April 14, 2016 over the failure of the Federal Government to address the lingering scarcity of fuel in the country.
In a statement issued on Friday, the co-facilitator of the group, Mr. Livingstone Wechie said another protest would be organised to express dissatisfaction over the deplorable electricity supply, amid increased tariff and incessant/fraudulent bank charges on poor Nigerians.

While expressing sadness over what he described as lack of economic policy direction by the Federal Government, Wechie said that the protests would serve as a platform to express the hardship being faced by Nigerians.

According to him, “We believe the government has exhibited gross ineptitude and incapacity in its dealings. Thus, it has continued to play the blame game on the past Goodluck Jonathan administration as a cover-up to its failures, which is a betrayal of its promises to Nigerians during the electioneering.

“The protests will help to demand a practical economic policy direction from the Federal Government.”