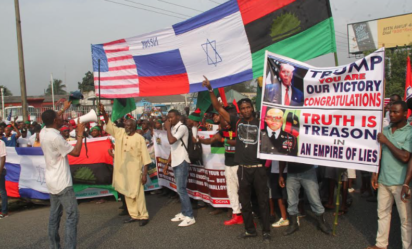 The Indigenous People of Biafra, IPOB, has said that over 200 of its members were still missing after its solidarity rally in honour of the United States, US, President, Donald Trump in Port Harcourt, Rivers State.

Recall that over 11 persons were allegedly killed during IPOB-Trump rally which turned violent in Port Harcourt, Rivers State on Friday.

But the police has since refuted the claim, saying only one death was recorded in the incident.

In a statement, the spokesman of the pro-Biafra group, Emma Powerful maintained that the report by the police was untrue.

The statement reads: “We the Indigenous People of IPOB and its leadership worldwide, wish to use this medium to correct the erroneous impression that we carried out a protest.

“What IPOB did on 20th of January 2017 in Igweocha Port Harcourt, Rivers State was a peaceful rally in solidarity with the newly elected President of the United States of America Mr. Donald J Trump, who took oath of office in Washington D.C.

“This solidarity rally in support of President Donald J Trump was announced by IPOB Worldwide on the 16th day of January 2017 by our media team and the contents of that announcement was unambiguous and could not conceivably be misunderstood or misrepresented to mean protest as has been erroneously reported by certain sections of the media.

“The event was scheduled and announced as a rally and not a protest. We would also like to place it on record that IPOB worldwide has confirmed that more than 11 Biafrans died as a result of the unprovoked, brutal and unwarranted military assault on our members during this peaceful rally.

“IPOB Family Units, whose members are missing, are advised to forward their names to our secretariat.”

He explained that IPOB lawyers were working tirelessly to locate and release those taken to Bori camp at Rumuola, the State CID, Port Harcourt and SOS Police Station at Miniokoro off Old Aba Road.