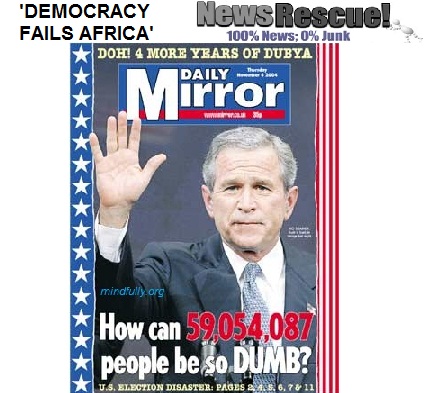 NewsRescue- In our articles previously, we described how democracy fails Africa, or actually fails period! We also have an article in which a study proved that democracy was a failed system as the masses are not ‘informed’ enough to make the right choices. For those still sitting on the fence as to whether to dump democracy and find a better system or not, here is a latest article on the direct effect of money on the US election system:

NEW YORK (CNNMoney) — Well, it’s over. Mitt Romney has amassed a nearly-insurmountable delegate lead, and is on track to become his party’s nominee for president.

The road to victory hasn’t been easy for the former Massachusetts governor. The primary campaign stretched on for months, and at least 10 different candidates topped the national polls at some point.

So how much did victory cost?

Romney spent a total of $76.6 million, far more than any other campaign. That total is, for example, more than the combined spending of Ron Paul, Rick Santorum and Newt Gingrich.

Now, money isn’t everything in politics — but it sure doesn’t hurt. And in this field, Romney dominated.

“The Romney team was putting a lot of money out there,” one Santorum adviser told CNN when the former Pennsylvania senator called it quits earlier this month. “The budget was a factor.”

At the end of March, the Romney camp had captured 607 delegates and 4.1 million votes. That means the candidate, who has cultivated a reputation as a penny-pincher, spent $18.50 per vote, and $126,000 per delegate.

But at least two of Romney’s contenders had a better votes-to-expenditure ratio.

Gingrich, for example, spent $21 million through the end of March, collecting 141 delegates and 2.2 million votes. That works out to just under $10 per vote and around $150,000 per delegate.

Paul, meanwhile, got the worst return on his money of the final contenders. The Texas congressman spent nearly $35 million, but received only around 1.1 million votes and 72 delegates. The math works out to $32.40 per vote and roughly $485,500 per delegate.

And that’s just the official campaign spending. This cycle, the influence of super PACs should not be ignored. While technically prohibited from coordinating with campaigns, the new spending vehicles acted as a supplement, and in some cases, became campaign linchpins.

When super PAC money is factored in, overall spending on Romney’s behalf jumps to $122 million, bringing his cost-per-vote to just under $30. By this measure, each delegate cost more than $200,000.

Gingrich also saw a significant jump when super PAC money is included. Adding in the $18 million spent by the Winning our Future super PAC, the former House speaker’s cost-per-vote jumps to over $17.75, while spending per delegate tops $275,000.

The Santorum super PAC added around $8 million in spending. That pushed him to almost $9.50 per vote and $101,500 per delegate. Less reliant on super PAC spending, Paul’s figures were little changed.

Moving ahead, Romney faces the challenge of ramping up fundraising efforts, while investing a healthy percentage of that money in the kind of ground game that will be able to get out the vote in November.

One candidate has a jump on Romney in that category: President Obama. The Obama re-election campaign has brought in $191 million, and already spent just less than half — or $89 million — of that total.